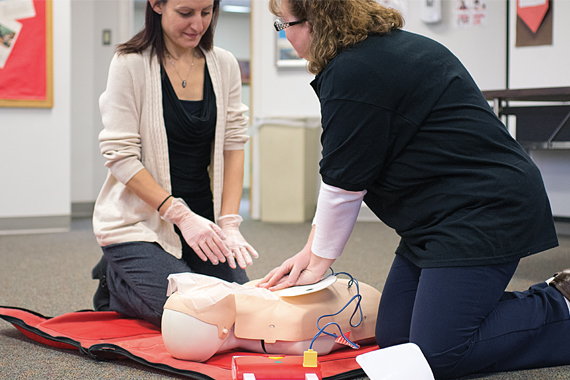 The Red Cross symbol is perhaps one of the world’s most recognizable – and what comes to most people’s minds when thinking about the Red Cross are disaster relief and blood donation. According to Tony Lasher, the Executive Director of the local Red Cross Genesee/Lapeer Chapter, it is so much more than that. The organization offers many services: Disaster Relief, Military Family Support, Health & Safety Education, Lifesaving Blood and International Services. With the exception of Services to the Armed Forces, the local Red Cross offers all services in one building in Flint, says Tony.

The Red Cross is the go-between for individuals in the military and their families. For instance, if a soldier is in Afghanistan and his wife is having a baby in the United States, a family member can contact the Red Cross and they will quickly be connected with the Military Base Red Cross who will relay information to the soldier, explained Tony.

Blood donation is the heartbeat of the Red Cross – many local people donate blood on a regular basis and for various reasons. “Some are motivated by a personal experience,” Tony says. He has donated blood every eight weeks for the past 11 years. “My wife had a very aggressive cancer,” he shared. Since their blood type was the same, he was able to donate his blood directly to her. Even after she succumbed to the disease in 2003, he recognized the importance of giving blood and has continued to do so regularly since then.

There are two donor centers at the local Red Cross – the Blood Donor Room, where whole blood is donated, and the Apheresis Center, where platelets are harvested from the blood to help leukemia and cancer patients, explained Tony. The blood is then returned to the donor after the platelets are removed. Tony is now considering becoming a platelet donor after being challenged by a friend. The Red Cross also hosts Blood Drives at various churches, businesses, local colleges and other venues.

Health and Safety classes are another service offered by the Red Cross. Classes are offered in CPR (adult and infants), Babysitting and AED (Automated External Defibrillator training). “The babysitting classes are great!” Tony boasts, adding that the classes give kids confidence in handling situations and helps keep them safe. Once certified, young teens can create an income source. There are also free classes that teach kids hygiene, basic first aid, and what to do if they’re home alone.

Your local Red Cross also offers the Nurse Assistant Training Program (NAT), which is one of just two such programs offered in the state of Michigan. The four-week course comes with a tuition cost, says Tony, which includes three weeks of classroom instruction and one week of hands-on training. Upon completion, students can become state-certified and eligible for employment. “It’s a great program,” boasts Tony, adding that it opens the door to continued LPN or RN training.

U of M-Flint has recognized the value of the NAT classes, and each year they send students to Red Cross to get trained. NAT certification gives students job opportunities, providing a revenue source while they finish their education. The Red Cross also works with other agencies, such as Career Alliance, to help unemployed individuals benefit from NAT. Tuition can be paid by government funding. “It’s given a lot of people an opportunity to re-train themselves and quickly gets them into decent jobs,” he says.

Tony hopes to expand the NAT as their facility is becoming too small to accommodate their growing numbers.

Disaster Relief is perhaps what the Red Cross is best known for, says Tony. When a disaster happens around the world, many people respond with monetary donations which are always directed specifically to where the donors want them to go, says Tony. Many donations are received for high-profile, global disasters, such as the recent typhoon in the Philippines. This is certainly admirable; however, what many people don’t know is that there is just as great a need for assistance at local disasters. The most common local disaster is a house fire, says Tony. Disaster relief volunteers are on call 24/7, and they are highly trained, unlike an average volunteer. Being a disaster relief volunteer requires a significant amount of training, including a minimum of three different training courses, in which volunteers learn to assess a situation, assess damage, and determine victims’ needs, such as clothing and shelter. (See related story about a local volunteer, next page.)

Local disaster volunteers assisted in the aftermath of flooding that occurred in the area over a year ago and the flood in Fenton a few years back. Recently, the local Red Cross set up warming stations after a severe November storm resulted in widespread power outages. Local volunteers have also been sent to larger-scale disasters, including Hurricanes Katrina and Sandy and the bombing at the Boston Marathon.

Tony is proud to serve in his capacity as director of the Red Cross. He is especially proud that 92 cents of every dollar donated to the Red Cross goes to the cause and that 98 percent of Red Cross personnel is volunteers. Some of the local volunteers beat him to work in the morning and leave late long after everyone else is gone for the day. Operating costs are low because of this. “We have some of the greatest volunteers,” he says. With the unique and vital services offered by the Flint Chapter of the Red Cross, they are making one of the world’s most recognizable symbols ever more prestigious.

Are you interested in purchasing photos from this story? Go HERE and select the “Red Cross” category.