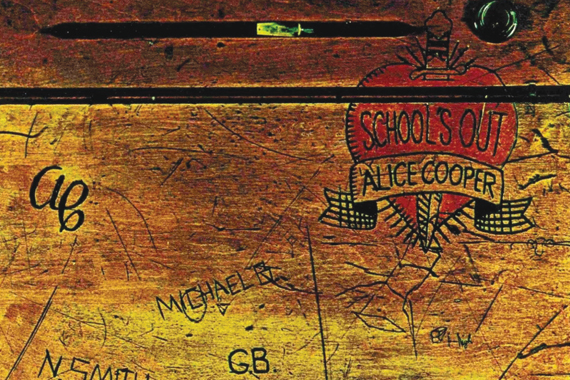 September 1, 1973 was the last Wild Wednesday of our live outdoor concert season at Davison’s Sherwood Forest. Chuck Berry closed the show with his famous “Duck Walk.” We proceeded to a friend’s house with several close acquaintances and kicked back till five a.m., then hit the air on WTAC with Mr. Berry co-hosting the first hour.

“Every Picture Tells a Story” by Rod Stewart was the No. 1 album on WTAC in October and we played the title cut every two hours.

On November 20th, WTAC exclusively introduced the new Led Zeppelin “Four Symbols” album in the Midwest. The Friday and Saturday after Thanksgiving, I presented a double-header show at The Saginaw Auditorium. Friday night was a touring production of Jesus Christ, Superstar. On Saturday, we staged the World Premiere of Alice Cooper’s new “Killer” show. With major funding from Warner Brothers, the theatrics were now beyond Broadway quality. At the end of the set, Alice was seized by mad monks, chained, whipped and then hung from an extraordinarily realistic gallows. The crowd went wild. He “came back to life” and played an encore wearing a tuxedo with tails, singing “No More Mister Nice Guy.” The cheering continued for ten full minutes after he left the stage. The big cities were about to be blitzed.

Bob Seger’s album “Back in ’72” provides an excellent summary of the entire year. Basically it seemed sleepy, uneventful, tedious and boring. Something had happened. Absolutely nothing. Nothing was “new.” All of a sudden, there was no more “all of a sudden.”

When I had graduated from high school in 1959, the first four or five years of the “Rock Era” had already come and gone. Even Elvis had lost excitement. Five short years later, the Beatles had burst upon the scene. In another five, we had “Woodstock.” Everything big had always somehow been replaced with something bigger and better. Finer. Faster. Hotter. Heavier. We were convinced the continual escalation of innovation and improvement would never end.

Less than a dozen years had separated Elvis’ first recording on obscure Sun Records and “Sgt. Pepper’s Lonely Hearts Club Band” on global monolith, Capitol/EMI. Just imagine! What a roll we were on! Most of us thought of ’72 as a temporary lull. With occasional moments of passing surprise and rising expectation, the “lull” for many is now more than four decades old.

Concerts at Sherwood Forest were becoming ever more infrequent. Band performance fees were starting to soar and major booking agencies were grabbing up the bigger acts and demanding much higher guarantees and percentages.

Bob Seger was now playing regularly throughout all of the Midwest and had developed a strong following in Florida and Texas. Ted Nugent was appearing throughout the entire country. Alice Cooper and Frijid Pink had gone international. I was grabbing occasional dates for new national talent by spotting them early and booking them far in advance before the rest of the world caught on. Other than that, the Rock ‘n Roll world had become quite corporate, divided between the stars and those playing bars. Musical Darwinism had seized the scene… only the strongest survived.

Easter Sunday ’72 brought Frijid Pink back to Sherwood Forest. May 26th, I promoted Big Brother & the Holding Company. It was the original group with one notable and obvious exception. Performing without little sister Janis Joplin, they played quite well, but attendance was marginal. The group was much better received later that evening at The Sandtrap Lounge on S. Dort Hwy., where I took them following the official gig.

On Tuesday, June 20th, Alice Cooper broke in his new “School’s Out” tour at a sold-out Flint IMA. Alice’s manager, Shep Gordon, now having to top the “hanging from the neck until dead” finish of the “Killer” show, had reached into his bag of terrifying tricks and come up again with what promised to be a real winner. At the end of the act, Alice would be loaded into the barrel of a cannon and shot through the air over the audience into a net stretched across the back of the auditorium.

The dramatic staging was transfixing. Alice slowly donned a “cannon suit” with masterful suspense. As the band droned a solid, throbbing tone, he courageously waved a pathetic salute to an anxious throng, bravely climbed into the weapon and disappeared. Lighting flooded the cannon and the drum roll began. A moment of sheer climax was at hand! Everyone held their breath. There was an ear-shattering explosion of fire and light. Smoke was everywhere. Protruding from the cannon’s mouth was a life-sized, sad, rag doll dressed like Alice. Malfunction: the dummy hadn’t even cleared the barrel.

The real Alice, of course, was hidden inside the cannon. It was sure dark in there, but he could hear the explosion. He counted to five. The stage lights would be struck by then and the crowd’s attention diverted by spotlights on the flying dummy. In the absence of ejection, the lighting operators kept their massive beams trained on the main set. Alice emerged. Now there were two Alice Coopers on stage! Which one was the dummy? Ummm. “Hi!”

Mercifully, the crowd enjoyed a special treat during Alice’s encore. WTAC had brought Mickey Dolenz to Flint in conjunction with a major client campaign, and I escorted him backstage to meet Alice prior to the performance. Alice was thrilled greeting a real “Monkee” and Mickey was excited to meet Mr. Cooper.

After roadies removed the faulty cannon from the stage, out came Alice Cooper, his band and Mickey Dolenz. The encore turned out to be a spontaneous ten-minute rendition of “Hey Hey! We’re the Monkees!” which Alice and the musicians knew by heart, having watched “The Monkees” as teens back in Phoenix, AZ. As soon as the crowd recognized Mickey, a loud, rapturous celebration erupted and 6,000 voices joined right in.

“We’re too busy singin’ to put anybody down.”

More Wild Wednesdays graced Sherwood Forest on July 12, August 2 and August 23. At the last show, we featured The Raspberries from Cleveland. Their “Go All The Way” had gone all the way to No. 1 on the charts.

November 23 was Thanksgiving Night. For the first time, I encountered serious head-on competition. Edgar Winters’ White Trash pulled in 900 at Sherwood Forest. It was a decent night, but only half a house. Alvin Lee and Ten Years After drew 5,000 to Flint’s IMA Auditorium for Detroit promoter Bob Bageris, who had booked them in five cities with a guarantee of $20,000 per performance. He lost money on three of the shows, but made it back and a little more with the other two. That was the new game – only big action could play.

Bageris returned to the IMA on December 8 with Fleetwood Mac opening for Deep Purple. He used WTAC as his exclusive advertising vehicle and I introduced both groups. (If you can’t beat ‘em, greet ‘em!)

Sherwood Forest fades as an amazing future unfolds on a Stairway to Heaven.