Alexis Brown has become adept at laughing off the assumptions, chuckling about the questions.

When you’re a rarity, that comes with the territory.

The Otisville native and former high school and college track standout is one of only about 150 female African American commercial airline pilots. That’s less than one percent of all United States pilots. 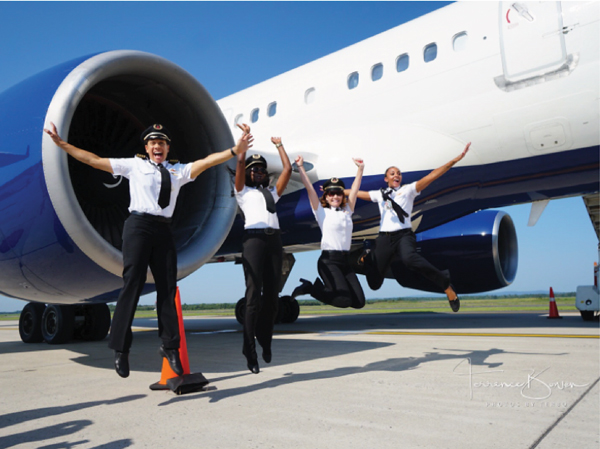 Brown, who flies for Delta Airlines subsidiary, Endeavor Air, also belongs to a non-profit group working to change those numbers – Sisters of the Skies. The organization was expressly created with the purpose of increasing diversity (in particular, African American females) on flight decks across the nation.

Last fall, Brown and other Sisters of the Skies pilots appeared on TV’s “Good Morning America.”

“Many people are like ‘Oh, you’re the actual pilot and you did the takeoff and landing?’,” Brown said while flashing a smile during the segment. “I’m like ‘yes, that was me’.” Another pilot remarked how they are sometimes mistaken for flight attendants or even baggage handlers.

When it came to choosing a career, the low numbers of those in the cockpit who look like her was no deterrent for Brown. Just as when she was capturing a state hurdles championship while competing for LakeVille High School or putting her name on lists of Western Michigan’s all-time best track and field performances, Brown established a goal and achieved it.

That is simply who she is. 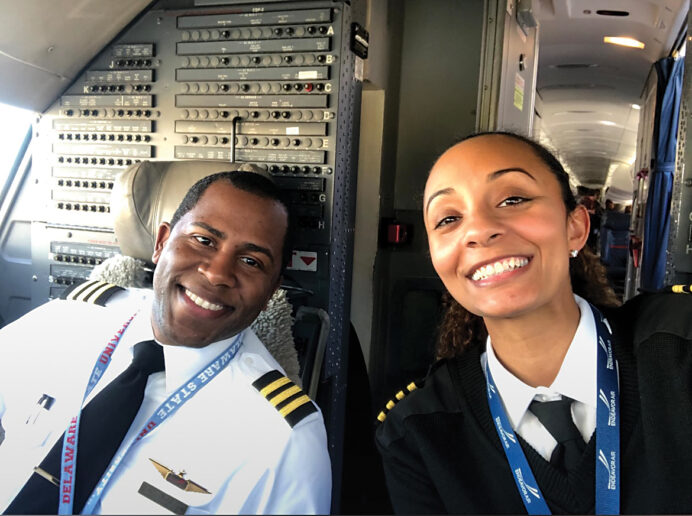 “My parents will tell you I wanted to be a pilot since middle school, but I knew for sure in high school it’s what I wanted to do for the rest of my life,” Brown says. “At first, I thought being a military pilot, especially a fighter pilot, seemed like a cool career. The older I got, however, working for an airline seemed like a better fit for me.”

Now 32, Brown graduated from Western Michigan with an aviation flight science degree a decade ago and began flying commercially four years later at age 26. That’s despite taking two years off from flying and training after giving birth to daughter, Aubrey, soon after earning her degree.

Brown joined Endeavor Air in 2017, attaining the rank of captain the following year. Currently, she is serving mostly as a first officer (co-pilot). “That means I assist the captain with anything they may need,” Brown says. “The number one goal, always, is working together to make sure we are safe for flight.”

“I’d certainly describe Alexis as motivated and driven to succeed,” he says. “She remains goal-oriented. Also, female African American pilots are a very small demographic within the greater pilot population. A considerable number of them are trailblazers and Alexis has helped others (of color) see what success looks like and gives them a footprint to follow.” To that end, Brown also belongs to the Organization of Black Aerospace Professionals and speaks to secondary school age youth about careers in aerospace and aviation. 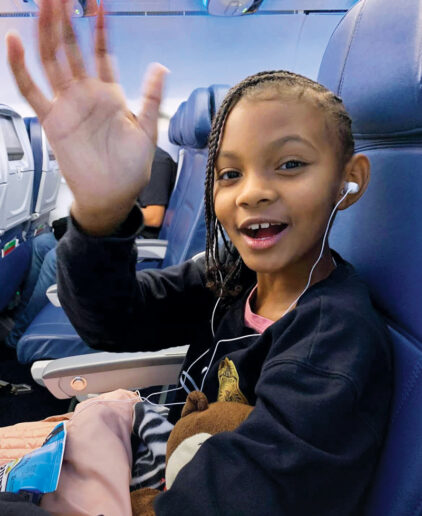 The single mother is typically away from home three to four days at a time, working 8-12 hours a day, including roughly six hours of flying. Brown is then home for three to four straight days, the best part of which is reconnecting with Aubrey.

“I am a morning person, so I love the days when we depart before 7am and finish before 4pm,” she says. “The hardest part about being gone for multiple days is being away from Aubrey, but she’s used to it now and we Facetime multiple times throughout those days. I’m fortunate to have an awesome family and group of friends who help me with her.”

Flying first appeared on Brown’s radar when she was able to go into the flight deck and talk to pilots during her first-ever flight in fourth grade. That same year, a Northwest Airlines captain discussed his profession during career day at Brown’s school.

While deciding on an aviation career, Brown was also excelling on the high school track. She racked up six total all-state (top eight) finishes in the 100-meter and 300-meter hurdles, winning the 2006 Division 3 state championship in the latter event, 27 years after her father, Ed, ran to a state 300 hurdles title of his own. 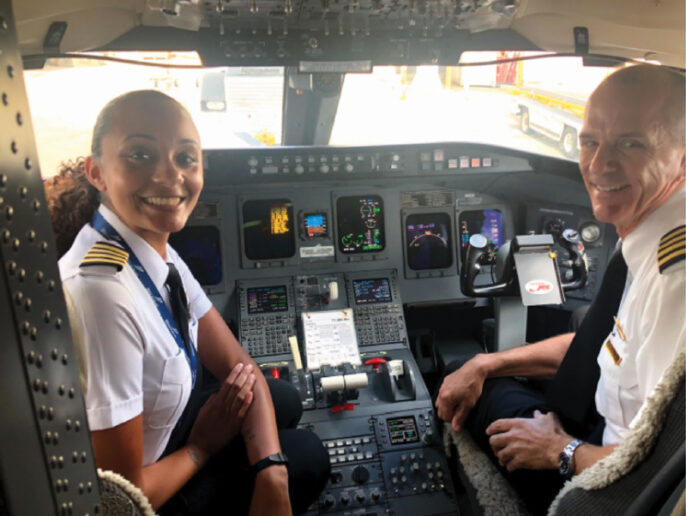 Ed Brown was one of the nation’s top 400-meter hurdlers during the first half of the 1980s, placing fourth at the 1982 National Championships and reaching the semifinals of the 1984 Olympic Trials.

Also LakeVille’s Prom Queen, Brown accepted a partial track scholarship to Western and told her parents she intended to study aviation. “They have been really supportive of my dreams and love the benefits that come with my career and that it allows me to take good financial care of Aubrey.”

Though her major and being a Division 1 college athlete meant a hectic schedule at times, Brown’s aviation training and track career both took off at Western. She still holds the school’s high jump record and was part of the record-setting shuttle hurdle relay squad. She ranks among Western’s top ten in the triple jump and pentathlon, as well. At the Mid-American Conference outdoor and indoor championships, she totaled 11 top ten finishes.

“The most challenging thing was making time throughout the day for class, flying, track practice/meets, plus studying,” she says. “It was a full schedule for the last two years of college which taught me how to prioritize.” 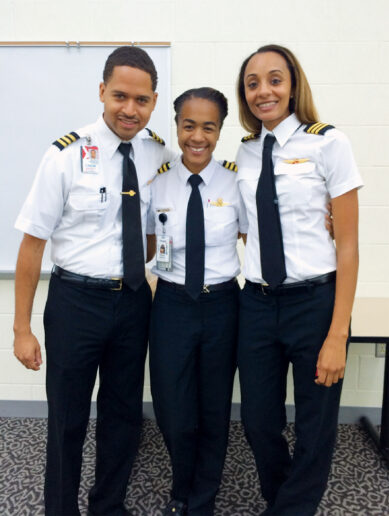 Brown began flying consistently during the summer of 2008, typically four times a week with various WMU instructors out of W.K. Kellogg Airport in Battle Creek. Pilots have to be ready for the unexpected and Brown’s first solo flight (about ten minutes) was just that when her instructor unexpectedly exited the plane after it landed one day.

“I had so many amazing instructors at Western, starting with Keith Pierson, because we could write a book about what we learned from one another,” Brown says. “Rose Ella is a counselor who guided me through the path I needed to handle both academics and athletics. Instructor (Lori) Brown was so active in the industry which was a big help to me, and (lead flight instructor) Jim Whittles took time to make sure no student was left behind.

Whittles is another of Brown’s mentors not surprised by where she is today.

“Alexis was a standout student and came in ready to take on the world,” he says. “For Alexis, being just good enough has never been enough. Really good pilots are able to resolve problems even if they haven’t been confronted by them before, and Alexis never asked me to solve the problem for her but worked through what was happening.”

Brown’s Western Michigan connections help her transition back to aviation after Aubrey’s second birthday. Chris Holton, a WMU classmate, convinced her to become a flight instructor in 2013. She spent more than a year at the Oakland County International Airport’s Flight 101 Aviation School before a two-year stint as a first officer and duty pilot for College Park, GA-based ExpressJet Airlines. 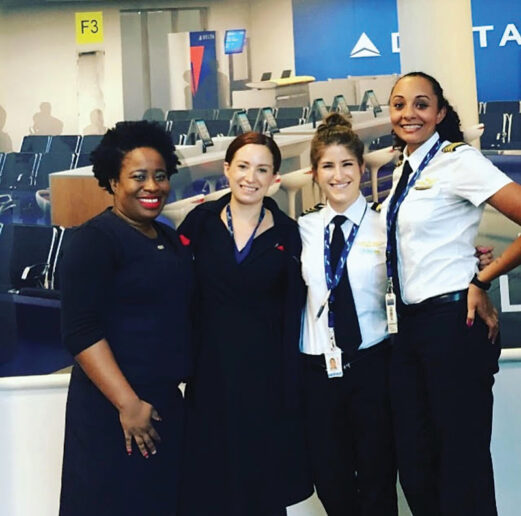 In addition to assisting the captain and making sure everything inside the aircraft was in working order, Brown also walked around the plane before each flight, checking for any issues. She also served as a liaison among pilots, schedulers and maintenance personnel. “I learned a lot about the industry as a whole at ExpressJet and how critical everybody’s job is,” she says. “There is a lot behind the scenes that people don’t know about.”

Brown’s future plans include working for a major airline and eventually, instructing again.

“As a pilot, Alexis demonstrates a commitment to safety and professionalism that we value at Endeavor,” says Russ Elander, Vice President of Operations. “She has a bright future in the airline industry, certainly here at Endeavor, and wherever her career takes her next.”