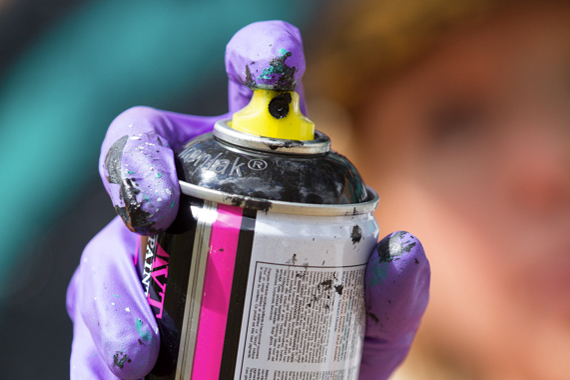 Ever wonder what happened to the annual “Bring it Fest” – the September festival celebrating expressions of art by everyone in the city? You needn’t worry; it is still going strong under another name: Aerosol and Audio.

September 21 saw the convergence of area artists at Memorial Park on S. Grand Traverse Street for a day-long fest of graffiti art exhibitions and live music. The brainchild of local artist Charlie Boike, Bring it Fest celebrated two years of prior success at Kearsley Park, but this year’s name and location change reflects the team effort of Boike and several others who wanted to capture the Zeitgeist – or, spirit of the time – visible in Downtown Flint. “This is epic,” said Boike. “As part of the GFAC Parade of Festivals, I feel like this event continues the revitalization of Flint, and I think it focuses on the positive energy that we have going around Downtown.”

Recruiting the help of friends both local and afar, Boike teamed up with Brian Presser for the second Bring it Fest once Presser returned from California. The two grew the event the second year, and expanded it even further this year. Presser’s immediate idea was to display his art by furnishing an outdoor living room. “My idea was to build a living room to be a gallery and a stage,” he said. Motioning with his left hand in the direction of the living room, Presser continued, “All those canvasses are a lot of my work, and this year I’ve swelled this into a main stage, and added a kitchen and ‘backyard’ with food.”

The living room stage may have been a prop, but the food surely wasn’t, as Flint Crepe Company, Table & Tap, and Wraps N’ Rolls provided food to attendees. Several vendors were in attendance as well.

Aerosol and Audio was in a sense reminiscent of Buckham Alley Fest. A look about Memorial Park produced the sounds of Tone Trezure laying it down on stage, graffiti artists galore, and a random guy dancing with a hula-hoop. One artist on site was Matthew Osmon, a local art teacher. Osmon took visual communications in high school at the Genesee Area Skill Center, and went on to study art more extensively at Columbia College in Chicago. He has done graffiti in town at a skate park, and after meeting up with Boike, he thought he would try his hand at graffiti at Aerosol and Audio, but not without some reservations. “I want to hold my own against veteran graffiti artists,” said Osmon. His painting was a depiction of a man emerging from “the universe,” representing the correlation of consciousness and the soul. He got the idea after a trip to India years ago. “It’s a little new age-y but I’m into that kind of stuff,” he joked.

Osmon loved the idea of Aerosol and Audio. He went on to say that, “The more stuff we can have like this, the better for Flint, obviously. I love bringing in other people from outside of Flint too, from Detroit and scenes like that. I’ve seen the art scene move over the last seven years, and though I’m not the kind of person who thinks art is going to save Flint or anything like that, I do think that we need more public art, particularly. It’s beautification.”

Though graffiti usually gets a bad rap, in this case it was a good thing. With a great response from the people, the city can look forward to like events in the future.

Are you interested in purchasing photos from this story? Go HERE and select the “Aerosol and Audio” category.