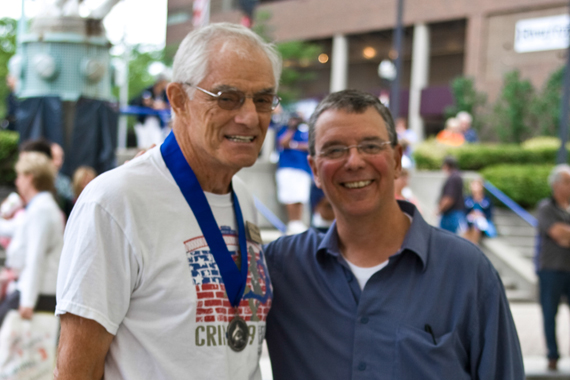 John Jerome, an avid member of the River Bend Striders Running Group, is keeping the string going! And his “string” is quite an accomplishment – referring to the number of years he’s completed the 10-mile run in the Health Plus Crim Festival of Races. On Saturday, August 24, he’ll run it for the 36th time, while this year marks the 37th year of the iconic road race. “I missed the first year,” he laughs, “but I have the string going, and that keeps me motivated.” John is president of the Crim 30-Year Club whose members have all run in 30 or more consecutive Crim 10-mile races. Special bonds and lifelong friendships are formed by those who’ve shared the grit and determination to cross the finish line for the 30th time.

The club started in 2006, the year in which the 30th Crim Festival of Races was run, according to John. That year, 24 people completed their 30th consecutive Crim 10-Mile event. In 2007, John and nine others reached the 30th milestone. Every year, the Crim holds a special celebration to honor the runners and walkers who have completed 30 10-Mile events and to welcome new members into the club. There are currently 83 members, and this year 18 runners are expected to be welcomed in, bringing the membership to more than 100.

A lot of work went into building a database to find the 30-year runners. “Riley McLincha is most responsible for the formation of the group,” John explained. “He took the time to collect data from old newspapers to build a Crim runner history.” It is through his efforts each year that a new group of runners and walkers reaches that 30-year-milestone. “Some have run or walked while they were injured to keep the string going!” exclaimed John. At 7pm on August 22, Lois Craig, the original Race Director, and Bobby Crim, the race namesake, will congratulate the new club members at the Ice Rink, next to the University of Michigan Pavilion. Jim Gaver, former WFUM Channel 28 commentator, who used to rebroadcast the Crim on Sunday evenings, will be the Guest Speaker. The celebration will include a cake with the new club members’ names on it.

If the pride in a 30-year string or membership in the exclusive 30-year Club is not enough motivation, consider the special treatment that these dedicated runners get on race day. Each member is given the number ‘30’ to wear and also gets to start the race ten minutes early. They also receive a T-shirt that reflects their 30-year status. “It’s a really unique experience,” says John, “because we have the course to ourselves.” He says the best part, though, is the reaction they get from the spectators. “We get all the crowd attention. ‘Way to goooo!’ the crowd screams. Then of course, the really good runners storm past us,” he laughs, “but not without much congratulation and recognition of the milestone.” And the recognition is well-deserved. “This group of 100 runners has been lucky enough and strong enough to walk up to that start line and run 30 or more years in a row,” John said humbly. Now, John has a new goal and another milestone in sight: 40 races in a row. “We’re hooked on the string,” he smiled.