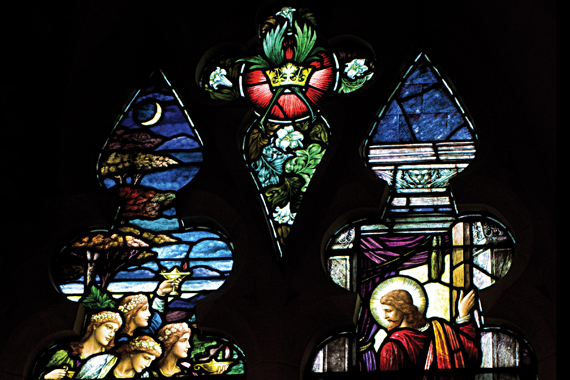 Recessed within the main sanctuary of St. Paul’s Episcopal Church is an alcove called The Five Sisters Chapel. Light shines through a large stained-glass window depicting five women preparing to enter a door to Christ, who stands waiting. A plaque on the wall dedicates the Chapel to the memory of Margaret McFarlan, Eliza Henderson, Almira Walker, Martha Crossman, and Sara Van Tifflin, who are described as “pioneers in this community where their married lives were spent.” Who were these women? Using genealogical data, My City Magazine pieced together a history of the women immortalized in glass.

Five sisters is a romantic notion; just think of the famous Bennett sisters from Pride and Prejudice. The women in the window really were sisters, and their maiden name was Simpson. When they came to Flint, their marriages created a web of power within the city. Michael Madden, a well-known local historian and the pride of the Flint Public Library, says that the women were the link behind many business relationships in the city. “There are all these men who are connected, but you wouldn’t know it looking at their names,” said Michael. “It was the women, the sisters, who connected them.” The story of the Simpsons is not simply a tale of wealth, however. It shows the sorrows and triumphs of pioneer life in Flint.

Like many early Flint settlers, the Simpsons were born in New York and moved to Flint as adults. In total, there were ten siblings: five sisters and five brothers. The eldest was Eliza, born in 1808. In 1815, when Eliza was seven, her first sister Margaret was born. Three years later, Almira was born. Born in 1824, Martha was the fourth sister and the seventh Simpson child while the ninth child and youngest sister, Sara Jane, was born in 1829.

Given our knowledge of the time period, it would seem reasonable to assume that Eliza and Margaret, and maybe even Almira, were married by the time their mother had her youngest child in 1834, but this was not the case. Eliza did not marry until she was 29 years old; in 1837, she wed Henry Henderson in her home state of New York, although Henry had business interests in Michigan at the time of their marriage. Almira jumped ahead of her older sister Margaret and married James Walker in 1840. The year 1842, although it was the year Margaret wed Alexander McFarlan, must have been a difficult one for the Simpson family. In May, the girls’ mother died at the age of 53. Although the cause is unknown, it may have been an illness because one week later, their little brother Lewis also died. He was only eight years old.

Historical records do not confirm which of the sisters was first to move to Flint. Village tax records from as early as 1845 list the Hendersons, but a sad story inscribed on the grave markers of Glenwood Cemetery indicates that the couple lived in Flint as early as 1838: in June of that year, Eliza bore her first child and sadly, interred him in Glenwood four months later. Almira’s husband James is also reported to have lived in Flint as early as 1836, but it’s not clear how he came to be acquainted with Almira back in New York, nor do we know whether she moved to Flint immediately after her marriage in 1840. Margaret and her husband Alexander did not move to Flint until 1850; by that time, the other four sisters were living in Flint. The two youngest girls, Martha and Sara Jane, who were 18 and 13 at the time of their mother’s passing, may have moved to Flint to live under the care of their older sisters, whose husbands were by this time well established. Martha married Alvin Crossman in Flint in 1846, and Sarah Jane married Reuben Van Tifflin in 1855 in St. Paul’s Church, which was only a wooden building at the time and not the imposing Gothic Revival structure as we know it now.

Prosperity followed the sisters to Flint. Their husbands played integral roles in establishing many of the earliest and most important Flint institutions, including Glenwood Cemetery, the Pere Marquette Railroad, numerous banking institutions, and the Michigan Institute for the Deaf, Dumb and Blind. As if that wasn’t enough, three of their five respective husbands became mayors of Flint. All five sisters were members of the Flint Ladies Library Association, the first Ladies Library in the state, comprising an early who’s-who of Flint female society.

St. Paul’s Episcopal Church appears to have been important to the family, as well. In 1917, Margaret’s daughter, Mary McFarlan Whaley, chose to erect the Five Sisters Chapel there to honor her mother and aunts. While their contributions to Flint’s rise as a great American city have withstood the forgetfulness of time, the fascinating details of the Simpson sisters’ private lives are buried with them in Glenwood.

Purchase photos from this story by going HERE and selecting the “Sister’s Chapel” category.