Career advancement and earning a lot of money are not everyone’s ideas of an accomplished life. For Bishop Gregory John Mansour, the head of the Eparchy of Saint Maron of Brooklyn and Flint native, living his faith and loving Jesus are his measures of success.

The oldest of six siblings, Mansour grew up in the Kearsley Park area where he attended St. Mary’s Church. He remembers playing at the park, swimming in the pool and going to Safety Town, among many other fond memories of Flint. “I loved growing up in Flint,” he shares. He also remembers the families who were his neighbors, including the Farah, Gantos and Lazar families, to name a few. Amongst his friends were Shane Gantos, Paul Farah, and Cass Curran.

When he was in the seventh grade, the Mansour family moved near Holy Rosary Catholic Church. He attended school there, then went to George Daly Junior High and Kearsley High. After graduating, he was inspired to become a man of God while working at Camp Copneconic with some other young counselors who shared a deep love for Jesus. The kids attending the camp were from the inner city and very poor. “I began reflecting on my own beliefs,” says Mansour. “I grew up going to church, but when you get out on your own, you wonder whether you want to embrace that faith. By the grace of God, I did. I knew I wanted to live my life for Jesus.” But, he wasn’t sure that he wanted to become a priest. Father Ronald Beshara at Our Lady of Lebanon Catholic Church, made a lasting impact on Mansour and his entire family. “Because of him, I started to consider the priesthood,” he says.

Mansour furthered his education at Mott Community College, then Western Michigan University, earning a Bachelor’s Degree in Health Education in 1977. That same year, he entered Our Lady of Lebanon Maronite Seminary in Washington, D.C. In 1981, he received a Post Graduate Degree in Theological Studies from Catholic University of America. On, September 18, 1982 at St. Michael Catholic Church in Downtown Flint, Mansour became the first parishioner from Our Lady of Lebanon in Flint to be ordained a Maronite priest by Bishop John Chedid. He then went on to Rome, Italy to study at the Pontifical Gregorian University and obtained a degree in Spiritual Theology in 1983. “My interest was spiritual life and how people seek God.” 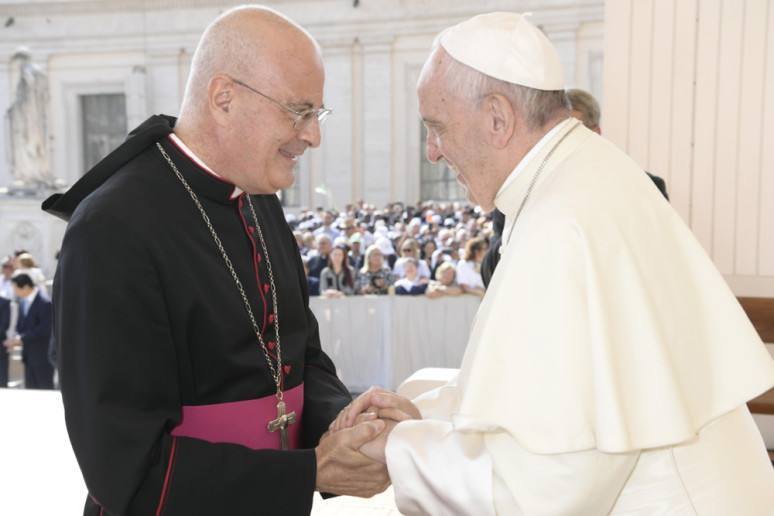 When the Bishop describes meeting Pope John Paul II, he is humble. “I was in awe,” he states. “He lived his faith and he loved living his faith.” Mansour has also met Pope Frances a few times during his travels. “Meeting Pope Frances was beautiful. He is also a man who lives for Jesus. He loves living his faith, and that is my particular interest.”

About halfway through seminary, Mansour began to question his path. He had thought for some time that he may want to marry. “I stepped back a little, which was good. It made me realize this is what I really wanted,” he shares. “God lets us choose our own path; but I thought to myself at the time that God would have been pleased with my choice.”

Bishop Mansour believes that in such a troubled world, Catholics (and all believers in God) have a very important role to play. “The Pope says we have something very beautiful to offer the world. A life of faith is very meaningful,” Mansour says. “The Catholic faith offers something very rich – a certain culture, a respect for life, for marriage, for friendship, and a respect for other people who do not necessarily believe the way we do.”

The Eparchy of Saint Maron of Brooklyn is composed of 45 parishes and missions, a Seminary in Washington D.C., a convent in Dartmouth, MA and a monastery in Petersham, MA. “All of this is my responsibility,” the Bishop states. He spends much time traveling from Maine to Florida to visit and connect with the parishes, and also travels to Lebanon at least once a year. 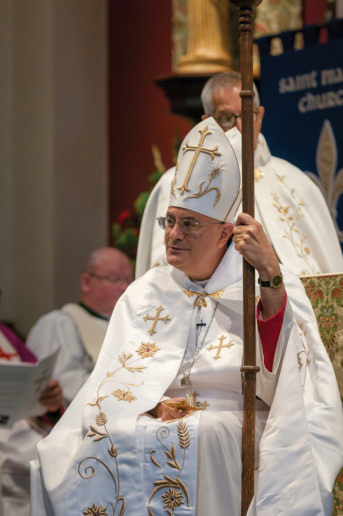 “The Catholic faith offers something very rich, a certain culture, a respect for life, for marriage, for friendship, and a respect for
other people who do not necessarily believe the way we do.”
Bishop Mansour

The Bishop stresses the importance of volunteerism and helping others. “People who give of themselves and have a personal relationship with God animate us to live as God wants us to live,” he states. He remembers working at his father’s grocery in north Flint, which was in a very poor area and a rough neighborhood. But what he saw was volunteers and businesses doing good for others. “If I knew a family was poor, I sold them produce at a discount,” he remembers. “It’s important to be involved and help those in your community.”

In his spare time, Bishop Mansour enjoys walking, bicycling and visits his family in Flint a couple of times a year. He also enjoys an annual eight-day silent retreat.

What does Bishop Mansour consider his biggest achievement? “Just living a happy, Christian life, following Jesus.” What makes him the happiest? “To be of help to my family, friends and the people I serve, and to live my faith life to the fullest. That’s what makes me the happiest.”
For more on Bishop Mansour’s extensive background, visit stmaron.org/eparchy/bishop/ 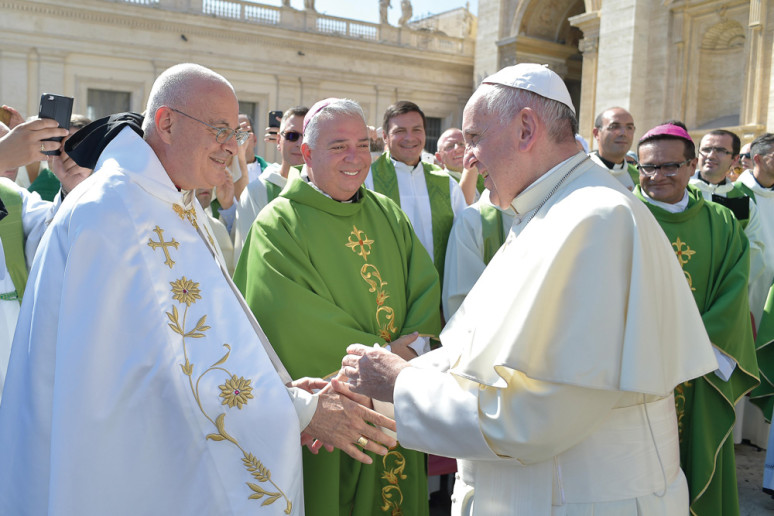 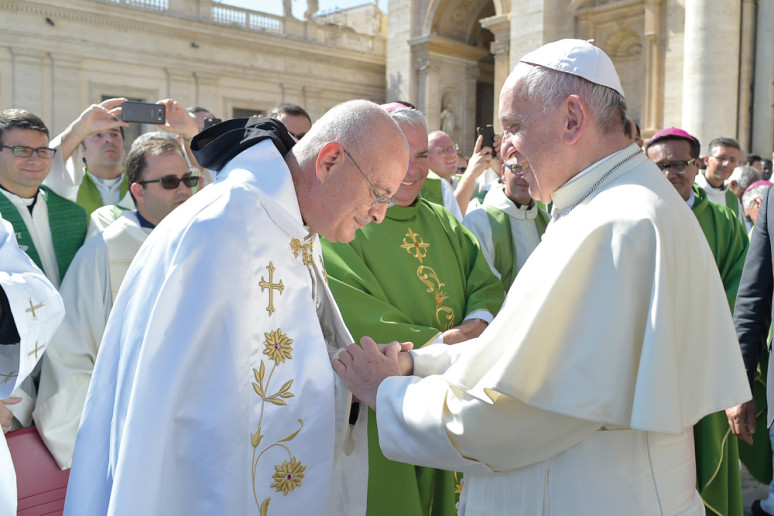 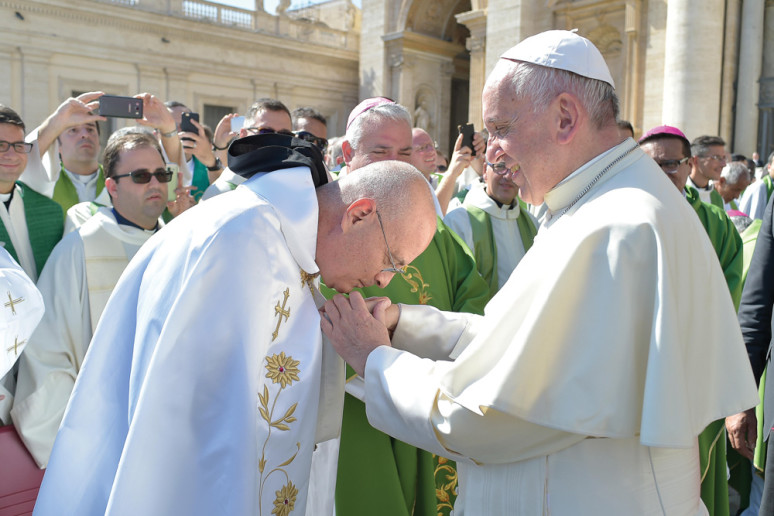 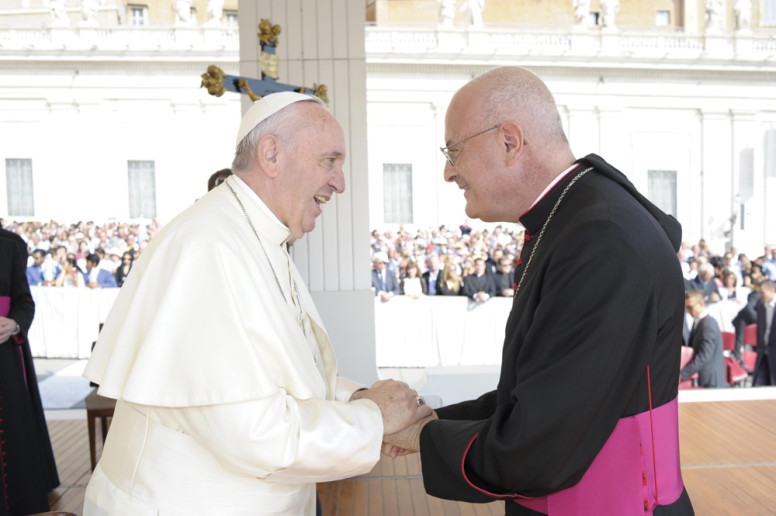