Serving his country during the Vietnam War was a life-altering experience for Joe Mishler of Holly. Drafted in October 1966, he served in the U.S. Army until his discharge in August 1968. He completed basic training at Fort Knox and Advanced Infantry Training at Fort Polk, Louisiana. He was with B Company, 4th Battalion, 23rd Infantry Regiment, 25th Infantry Division. “Basic training wasn’t as bad as people say it is,” he remembers. And his thoughts on being drafted: “I was glad to get away from home after flunking out of college.”

During his service, Mishler received two Purple Hearts, Armed Forces Expeditionary Medal, two Vietnam medals, Korean Service Medal, National Defense Ribbon and the Combat Infantry Badge, which is one of his prized possessions. Vietnam was quite the culture shock for the young soldier. “It was like nothing I’d ever seen,” Mishler says. “There were people living in the streets, everything caused illness – and the smell took me decades to get over.”

And memories of combat are forever etched in his mind. On his first night in Vietnam, he was a gunman on the front line. “People were shooting and blowing up things. It sharpens your whole perspective,” he says. “I had a couple of profound experiences in Vietnam that made me really reflect on life. It’s not like what you see at the movies.” 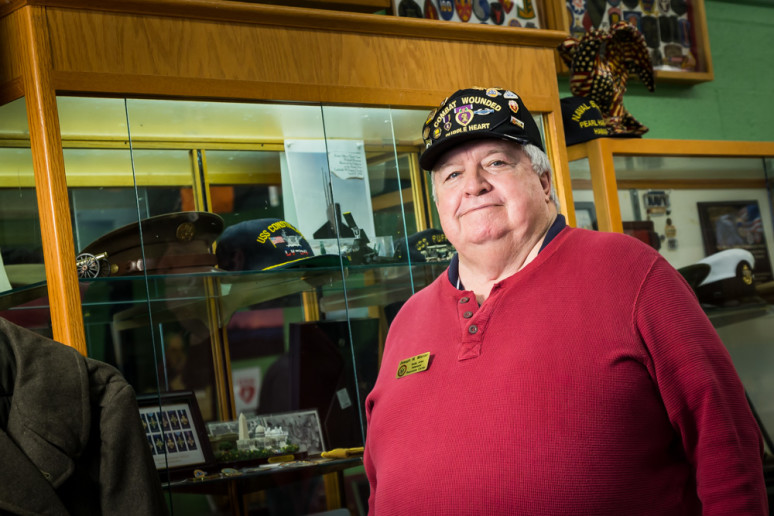 He remembers a time when he was on guard duty at 2AM, sitting behind a huge machine gun in the jungle. The sergeant radioed him and asked if his weapon was loaded. “When I give you the order, pull the trigger,” the sergeant said. Mishler couldn’t see or hear anything but his whole body was shaking. The order was given and he fired. “Keep firing! Keep firing!” he was told. “Bullets were flying all over the place. I don’t know how long it lasted,” Mishler shares. Then, there was silence. He could hear people moaning. He just sat there shaking, surprised that what felt like many hours of time had been just 30 minutes. “I could still feel the kick of the gun for hours,” he says.

The next morning, the sergeant told Mishler to patrol the area so he could see what had happened. He saw a very large bomb crater and around 12 bodies. “I was not prepared for that. I was sick.” His sergeant told him, “You have to look at it this way: you saved us.”

Mishler earned his first Purple Heart in May 1967, when the Armored Personnel Carrier he was riding in hit a land mine. A Purple Heart is awarded to members of the Armed Forces who are wounded by an instrument of war in the hands of the enemy. The soldier sitting in front of Mishler and the vehicle’s driver were killed. A medic asked Mishler if he was okay. “I was cut and banged up,” he says. He had to dismantle the gun from the APC and place it on the ground and he began to fire. “I was out in the open, with no cover. There were people firing at us and I kept asking myself, ‘Why am I still here?’ I kept waiting for the bullet to hit me, but it didn’t. A couple of my comrades weren’t as lucky.”

In June 1967, Mishler was injured during combat. He and another soldier were firing mortar rounds in the black of night. The soldier next to him got hit and then a bullet hit the mortar rounds, which exploded. “I only remember bits and pieces,” Mishler says. He recalls a medic telling him everything was going to be alright. “I didn’t feel anything, but I remember screaming and being put in the medic van where they gave me morphine.”

Mishler was sent to a hospital in Japan, where he had surgery and was in a coma for two months. His hands and eyes were badly injured and he suffered severe head trauma. Back home, his parents received two telegrams – one said he had been killed and the other that he was wounded and being treated. Mishler also remembers finally being able to call his parents. “I got my dad on the phone and it took me five minutes to convince him it was me.”

After much rehabilitation and physical therapy, all Mishler wanted was to go home. But it wasn’t meant to be. He was given orders to go to Korea and work as a doctor’s assistant, despite his many injury-related limitations. He continued to have physical problems, such as dizziness, headaches, trouble focusing and issues with his hands.

Finally, in August 1968, Mishler was discharged. “I realized that I had seriously changed. I wasn’t the person I was when I was sent away. No more shy boy.” Mishler suffered nightmares and flashbacks for a long time. He didn’t go anywhere without carrying a pistol and wouldn’t stand under a tree for years, due to an incident when mines were discovered in the trees above where he was shooting.

“I always say that for me, everything began with Vietnam,” he reflects. “It really changed me. I decided in Korea that I wanted to do some good in all of the devastation.” And Mishler made good on that promise to himself. He went back to college on the Disabled Veterans GI Bill and got his teaching degree. “I never looked back,” he says. He got married and had two children. He was a teacher at Holly High School until he retired. And, he has performed much service work over the years – helping to bring the Vietnam Memorial Wall to Genesee County, and helping to build the Reflections Monument at Bluebell Beach. He is a mentor for the Genesee County Veterans Treatment Program and is also involved with Vietnam Veterans of America Chapter 175. “Chapter 175 has really shaped my life,” he admits. And now, his work with the Holly Area Veterans Resource Center is also very rewarding.

The after-effects of the Vietnam War still linger for Mishler. He suffers with health problems due to Agent Orange. But he hasn’t slowed down and has no intention of doing so. “I’m 70, and I feel lucky,” he says with a smile. “There is still more for me to do.”

“I realized that I had seriously changed. I wasn’t the person I was when I was sent away. No more shy boy.”

It’s not just on Veteran’s Day that those serving our country are remembered at the Holly Area Veterans’ Resource Center (HAVRC) – it’s every day. On a table sits a basket of tiny toy soldiers, with a sign that reads: Take a soldier home and place it somewhere that will remind you to pray for our men and women serving our country. Two local veterans, Joe Mishler and Ray Pfenning, are the founders of HAVRC, a nonprofit organization that opened in October 2015. Its mission: “To provide veterans access to information and services that will improve the quality of their life and that of our community. To never forget the commitment made by our veterans in our community, state, and nation.” 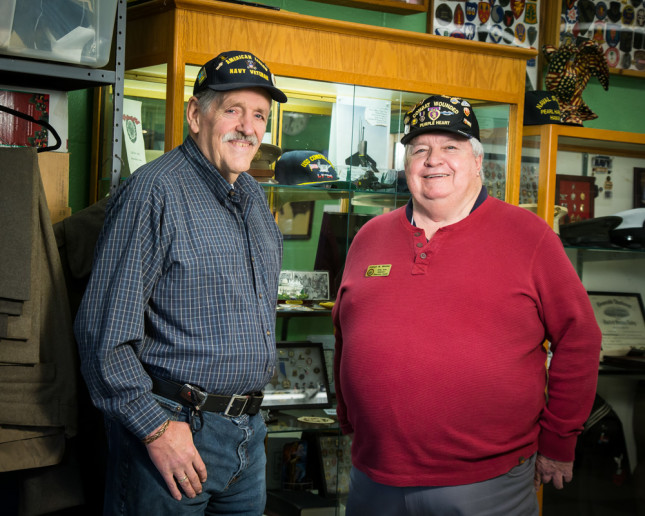 Since there was a large population of veterans in the area, Mishler and Pfenning worked with a group of volunteers to create a place for them to get the help they need. They sent out a survey to determine the needs of area vets, to which 250 people responded, with a majority saying they would like a resource center in the Holly area. They also discovered that many veterans were frustrated by long waiting lines at veterans’ agencies. “A lot of veterans are not happy with the Veteran’s Administration (VA),” Mishler reports. And it isn’t just Oakland County they help – many from Genesee County also receive services there. “No one is turned away,” says Mishler.

According to Pfenning, the organization has helped 115 veterans file claims so far this year. Twice a month, a Certified Service Officer comes to the Center to help the vets file required paperwork. HAVRC also assists veterans and their family members to find available benefits, and learn about health care, mental health services, training and education, emergency financial assistance, to name a few. “We helped find housing for three homeless veterans this year,” Pfenning reports. HAVRC also helped three people resolve issues with discharge papers, and have helped people become caregivers for veterans, which is a service the VA will pay for. They also assisted an elderly veteran with filing a claim with the VA for hearing aids, which was approved.

HAVRC is in the process of creating a library. Many military books have already been donated and they have also received private donations. The library will be named in honor of Scott Dudak, a U.S. Navy veteran who passed away last year. HAVRC is located at the Karl Richter Community Center, 300 East Street in Holly. “Everyone here is passionate, and we have a great board of directors,” says Mishler. “It’s all about veterans helping veterans.”