Saving the unsaved. Preaching the gospel. Helping the needy and the community. This is the mission of Freedom Temple Church of God in Christ, located on Flint’s north side. Charles Williams is the founder and pastor and has been serving God and his community for 40 years.

“I saw the need,” Charles says with a warm smile. “There were things I could do to better people’s lives and help the community.” His ministry is a progressive one that started with just his sister, his wife and their children. The congregation continued to grow over the years; but with the shift in the economy and people leaving the state, the membership now includes around 100 faithful worshippers. “We still have a strong, committed group,” the pastor reports.

Born in Gould, Arkansas, Williams moved to Flint in 1968. He came to Flint to visit his mother and see what the city was like. In the 60s, the auto industry was booming and there were lots of jobs, he remembers. He joined the Army and served his country from 1970-1976, two years of active duty in Germany and four years in the Reserves. He married his wife, Sandra, in 1972 and retired from General Motors after many years. 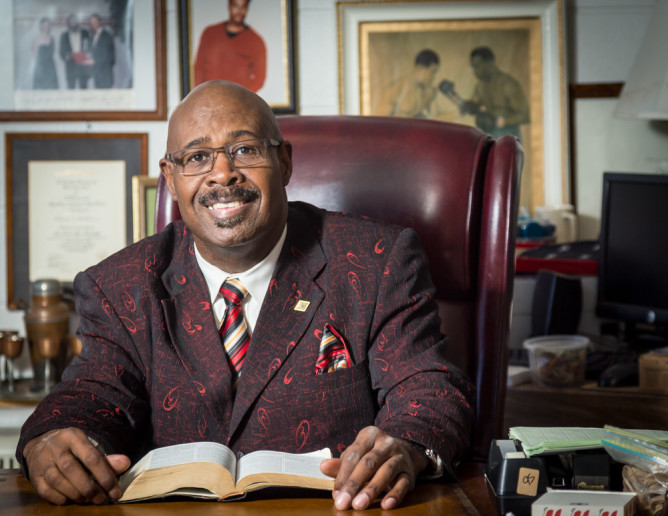 On February 18, 1973, Williams accepted the Lord and became a born-again Christian. That experience inspired him to attend Flint Bible College, where he studied theology and graduated in 1977. He traveled the country preaching the Word of God as a National Evangelist, then felt a calling to get away from traveling and have his own ministry. The building where the Freedom Temple is located came up for sale, which he purchased “taking a huge leap of faith,” he remembers. “The spirit of God spoke to me and said that within one year’s time, I would have a congregation to sustain this ministry.” And, that is exactly what happened.

“Pastoral ministry is never done,” Williams shares. “You’re available 24 hours a day, seven days a week. It has to be a calling, because it is a tough job. You need to have a shepherd’s heart.” And preaching from the pulpit is just a small part of his work. Much of his typical day is spent ministering; going to nursing homes, hospitals, funerals, weddings, and counseling individuals. “The list goes on and on,” he says with a smile.

In this day and age, being a pastor isn’t easy. Statistics indicate that 15,000 pastors leave their ministries every month worldwide, Williams reports. “As we proceed, our new pastors will need to be well educated in theology and leadership, and they need to understand that ministry is not just a podium. You have to get in the real world. That’s what I have done for the last 40 years.” He would like to see more of the churches and denominations work together. “There is no black heaven or white heaven,” he states. “I would like to see us pull together and unite. We have to get together here. United, we stand; divided, we fall.”

Being a pastor in the heart of Flint has not come without challenges. “Flint has suffered lot,” Williams admits. “When the Auto Giant was slain, many people were not comfortable here anymore and many left. The faith of the people had been shaken very hard.” The failing economy led to falling numbers in church membership, which led to a lack of faith, he adds. “But, Freedom Temple has continued to thrive. The one thing I have learned is that you have to have faith and trust in God, and never give up.”

Williams believes with all his heart that once the Water Crisis is resolved, Flint can make a comeback. “I see it turning around without the auto industry,” he says. “You have to make things happen. Flint had it so good for so long, people got spoiled. Now, it’s time to get to work.”

During Black History Month, Pastor Williams urges his congregation to honor those who stood up for what is right – Dr. Martin Luther King, Jr., Frederick Douglas and many others. “We have to be even more aware now,” he says. “There is still work to do. What we have learned has prepared us for the present. There are new things on the horizon that we must take on.”
“I would like to see us
pull together and unite.
United, we stand;
divided, we fall.”