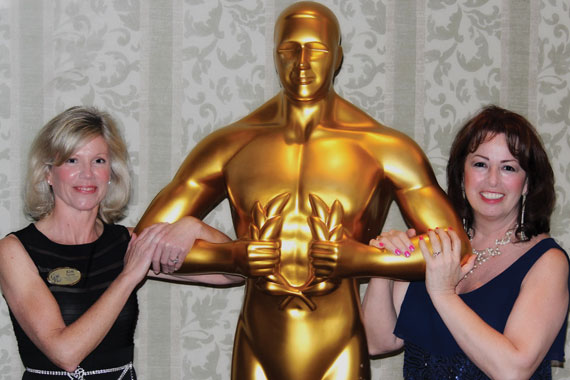 The annual Grand Blanc Chamber of Commerce held its Chairman’s Award Dinner in March at Warwick Hills Golf & Country Club in Grand Blanc. Each year, the Chamber recognizes individuals and businesses for the many ways they give back to the community.

For volunteering his time and experience to provide medical care to those in need, for mentoring others aspiring to work in the health field and for exemplifying excellence in his field, Dr. Bobby Mukkamala was recognized as the Health Profession Hero. For the last 13 years, Dr. Mukkamala has treated patients at the Genesee County Free Medical Clinic. “I am motivated to serve and feel strongly about the resilience of the Flint community,” he said. “We have issues that we can overcome through after-work interests, volunteering, and through the influence of our individual characters to create the future we want for our community.”

The Children’s Hero Award went to Coach Steve Moreland. This honor recognizes an individual who is a positive role model for children while always finding time to contribute to their betterment.

Better known as “Coach Steve,” Moreland has been dedicated to teaching life lessons through the game of basketball. Through practices, camps and games, he has reached more than 100,000 children in Genesee County and more than 1,000,000 across the state.

Grand Blanc Arches/McDonald’s received the Hometown Hero award. This honor recognizes a business whose owners and staff demonstrate generosity through outstanding community service to the area surrounding it. Kirk and Marie Heath, owners of five McDonald’s stores in Grand Blanc, Fenton and Holly belong to the Chairman’s Circle, which designates their donations to help fund children’s fitness activities.

A first-grade teacher at Cooke Elementary School in Grand Blanc Township, Murphy operates a café in her classroom as part of a fundraising project for a charity chosen by the students. Over the years, first-graders have donated more than $5,000 to Hurley Medical Center’s Neonatal Intensive Care Unit.

Ken Thomas was recognized as Citizen of the Year for demonstrating outstanding service and contributing to the overall good of his community without monetary gain. Thomas chaired the Grand Blanc Township Police K-9 fundraiser, raising more than $25,000 for the Canine Unit to purchase a police dog. During the 2012 “Back to the Bricks” event, he hosted a Pinewood Derby that brought together police officers, fire fighters, the press, local politicians and young boys to build more than 500 cars and a test track. Thomas was also named Volunteer of the Year for Special Olympics.

The Chairman’s Award was given to Shannon Rynca, a nominee whose level of dedication and volunteerism particularly touched and impressed the judges. Rynca is an advocate for military families, providing support to the soldiers and their families before, during and after deployment. In 2008, she started a support group, Never Forgotten, to assist families of fallen soldiers from the state of Michigan. In addition, Rynca volunteers for Operation Homefront to collect and distribute toys and school supplies to children of military personnel. “My husband is a soldier and we are so proud of him and honored to be part of a group of people who are willing to sacrifice daily for this country’s freedom,” she said.

Recipients of The Chairman’s Awards are chosen from nomination forms submitted by Chamber members, Grand Blanc residents other Genesee County citizens. After considering the criteria for each award category, a committee of individuals who are unfamiliar with the candidates reviews the nominations and selects the winners.

PHOTOS COURTESY OF THE GRAND BLANC CHAMBER OF COMMERCE