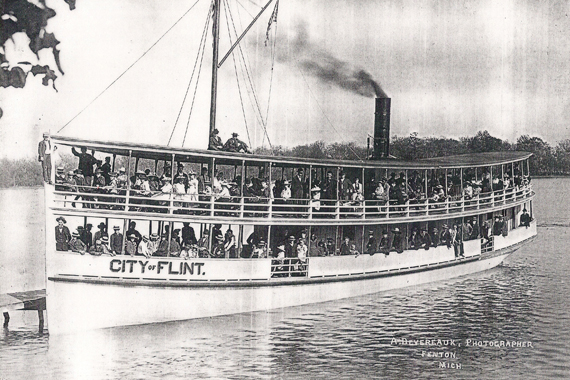 Fenton Township is home to 19 beautiful lakes, the crown jewel of which is Lake Fenton. The largest in the area, Lake Fenton is an 845-acre, natural spring-fed lake 90 feet deep. Called Long Lake until 1932, its rich history is beloved by Bonnie Mathis, Fenton Township Supervisor and a longtime riparian. “This lake means everything to me,” she smiles. Bonnie grew up in a home on Lake Fenton, raised two daughters in Fenton Township and now enjoys lake living again with her grandchildren, who will be the fifth-generation to spend their summers on Case’s Island. While Lake Fenton is now surrounded by beautiful homes, Bonnie remembers a time when it was a recreational spot that attracted visitors from all over. She recently spent an afternoon with My City Magazine sharing photographs, fond memories and information she has gathered about the lake’s history.

Bonnie’s parents, who lived in Flint, purchased a summer home on Lake Fenton’s Woodhull Landing in 1950. As a child, Bonnie never wanted to travel to the lake home. “With no expressway, it took forever to get there,” she remembered. Her family made the Lake Fenton home their permanent residence when Bonnie was in college, and she has many fond memories of summers there. She reminisced of days spent horseback riding, swimming, boating around the lake, and skiing at the ski club. “When I was little, I got to be on top of the pyramid!” she exclaimed. She also remembers taking a little boat out to Windsor Beach, where there was an island with a lighthouse and thousands of turtles. “We would take the boat out and get turtles,” she says, adding that that particular island is no longer there.

Bonnie remembers a time when the shores of Lake Fenton looked very different from the current shoreline dominated by residences. Back in the early 1900s, the lake became an entertainment attraction when Mr. and Mrs. Charles MacGillivray built Summit Heights where the Sail Club is now. The three-story pavilion had a huge dance floor, restaurant and facilities for water-tobogganing, swimming and boating as well as a huge slide. “People would come from all over!” Bonnie exclaimed. Fine orchestras played there, a great attraction for the young people of Flint and surrounding areas. Sadly, the entire pavilion burned down after a dance one night in 1936. There were also two double-decker boats on the lake in the early 1900s, one named The City of Flint and the other named The City of Fenton, which ferried people to Case’s Island and other destinations around the lake. Visitors rode the train to the Fenton Hotel and were taken to the lake shore by horse and buggy. Johnson’s Landing was a very popular place back then, says Bonnie. On the property where the Moose Lodge now stands were a three-story diving board and a yacht club. Log Cabin Point was named after a beautiful log home with turrets, balconies and stone chimneys.

Bonnie has collected many photos and newspaper clippings over the years, carefully documenting the lake’s history. It is important to her to preserve the history for future generations. “I raised my children here and now they are raising my grandchildren here,” Bonnie says. “It’s the greatest place to be.” 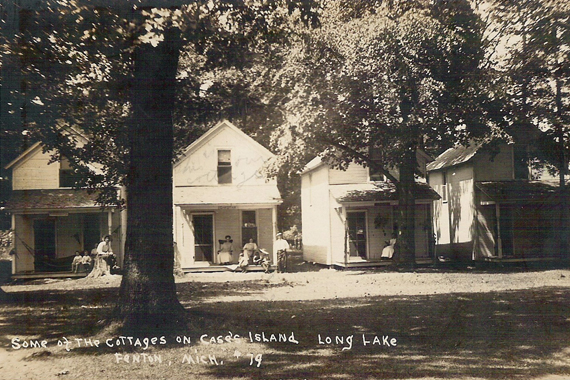 Case’s Island, located in the middle of Lake Fenton off the western shore, has a rich history. Enoch Smith, a trapper and friend of the Chippewa Indians, established “squatter’s rights” on the island more than a century ago. After one trapping season with the Chippewa, around 1837, Smith decided to remain, and took possession of the island. He dug a cave in a hill on the south side and lived there in primitive fashion for several years.

The first home on the island was owned by Charlie Case. “He had a grocery store there and would cut blocks of ice out of the lake,” says Bonnie Mathis. Everything was brought to the island by boat or walked over on the ice in the winter because of its isolation, which is why Detroit’s Purple Gang reportedly used the island for a hiding place in the 1920s. At one point in its history, Bonnie says four or five cottages caught fire on the island and a bucket brigade was formed to extinguish it.