According to Menear, there were three murals on the historic side of the Courthouse, which were the showpieces when it opened in 1926. “One mural had been taken down and destroyed,” Menear explains. It was re-created by the late Flint-born artist, Stefan Davidek (1924-2016), and is now displayed in Judge Archie Hayman’s courtroom. A 1926 black-and-white photo and remaining mural pieces located above the ceiling line provided the basis for the re-creation. The mural panels represent the industries that provided economic growth in the region: lumber, agriculture and manufacturing. Though painted in 1926, the mural was reminiscent of the monumental artistic works commissioned in The Great Depression, under President Franklin D. Roosevelt’s Works Progress Administration.

The other two murals are located in the courtrooms of Judge Geoffrey Neithercut and Judge Richard Yuille. The mural composition in Judge Yuille’s courtroom reveals classical and allegorical themes, with muses depicted in the upper corners representing symbolic figures of justice. The fasces, (bundles of rods bound together around an axe), were emblems of authority in the Roman era. Common, Natural, Roman and Mosaic Laws are also noted in the depiction. 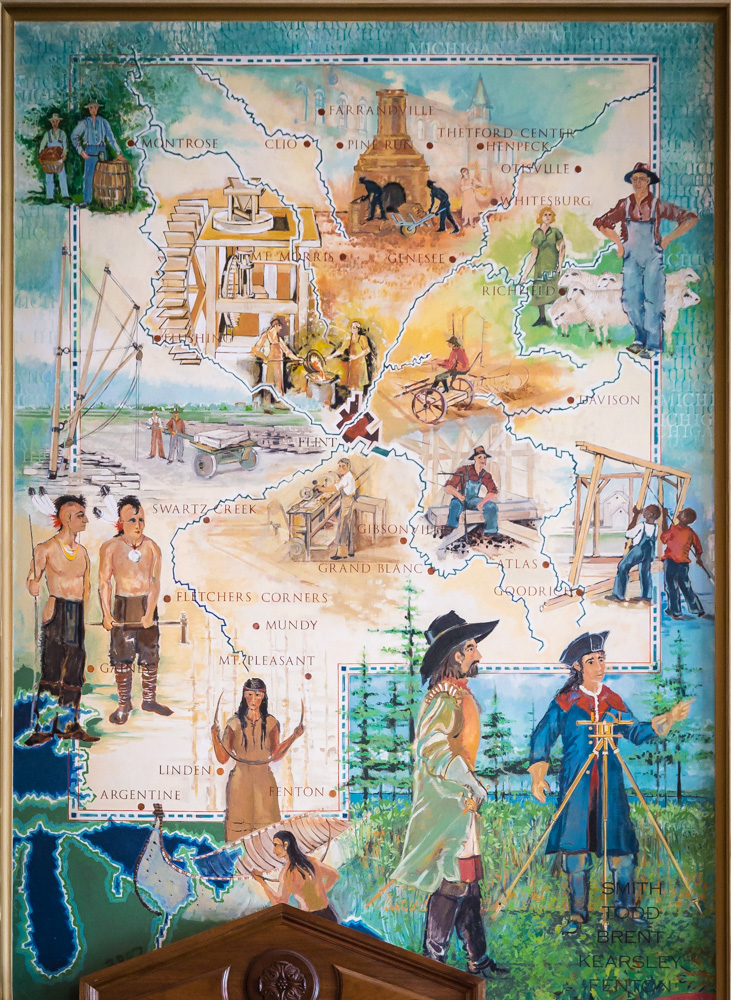 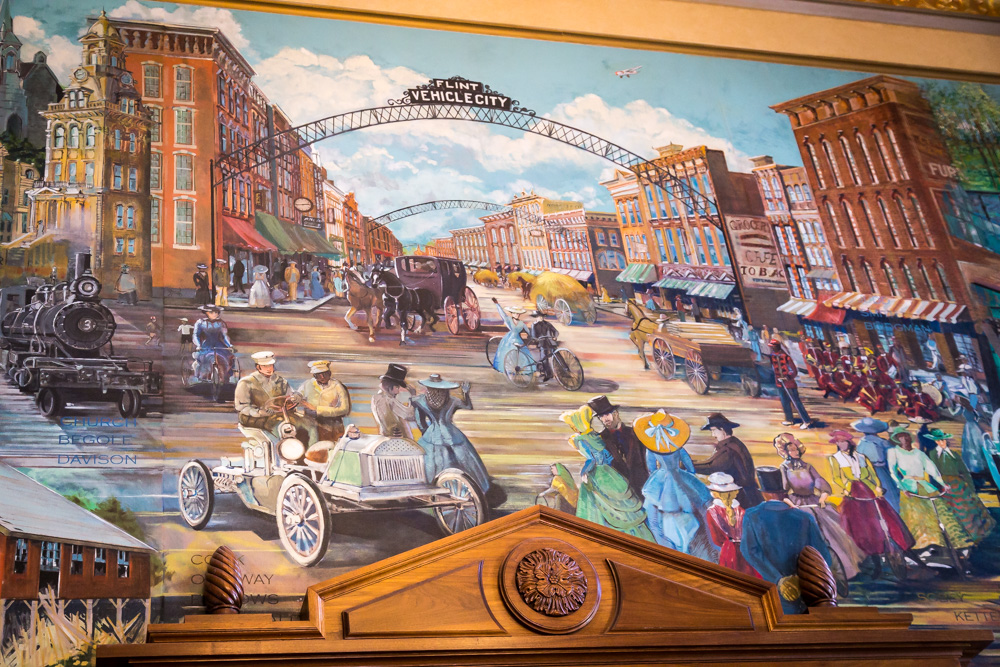 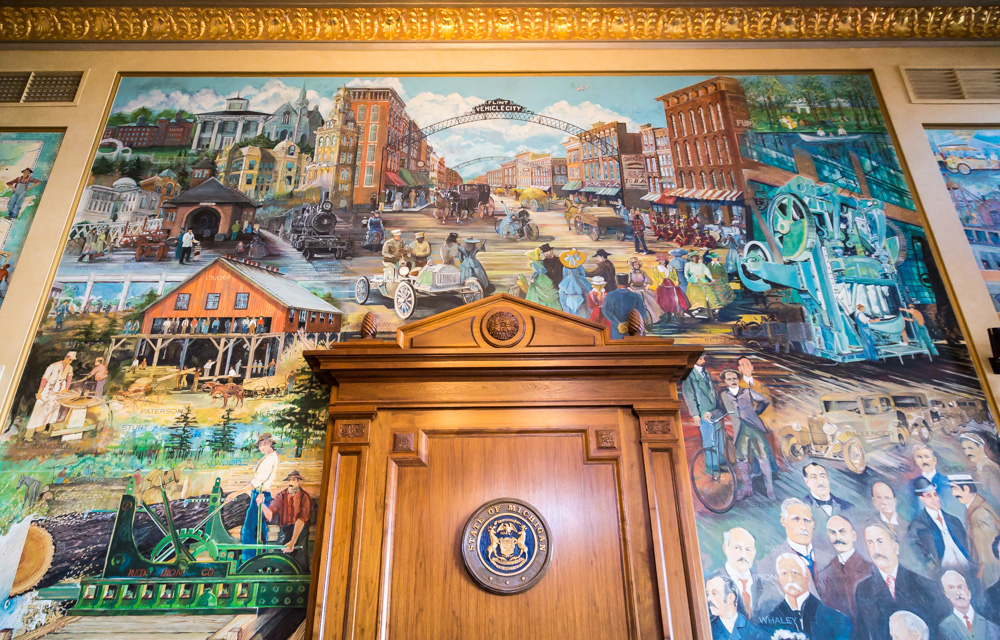 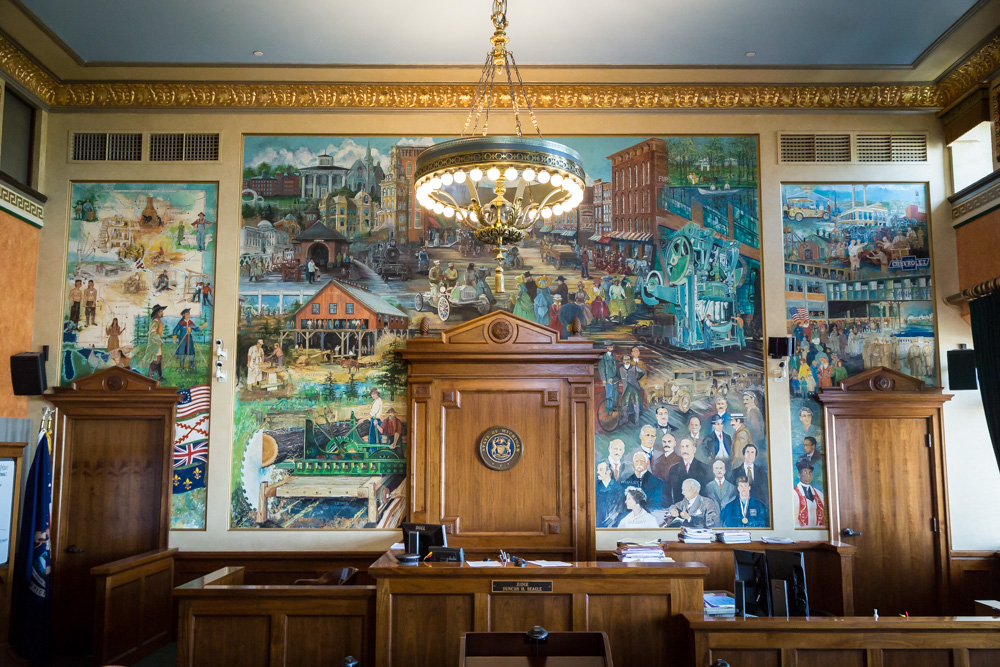 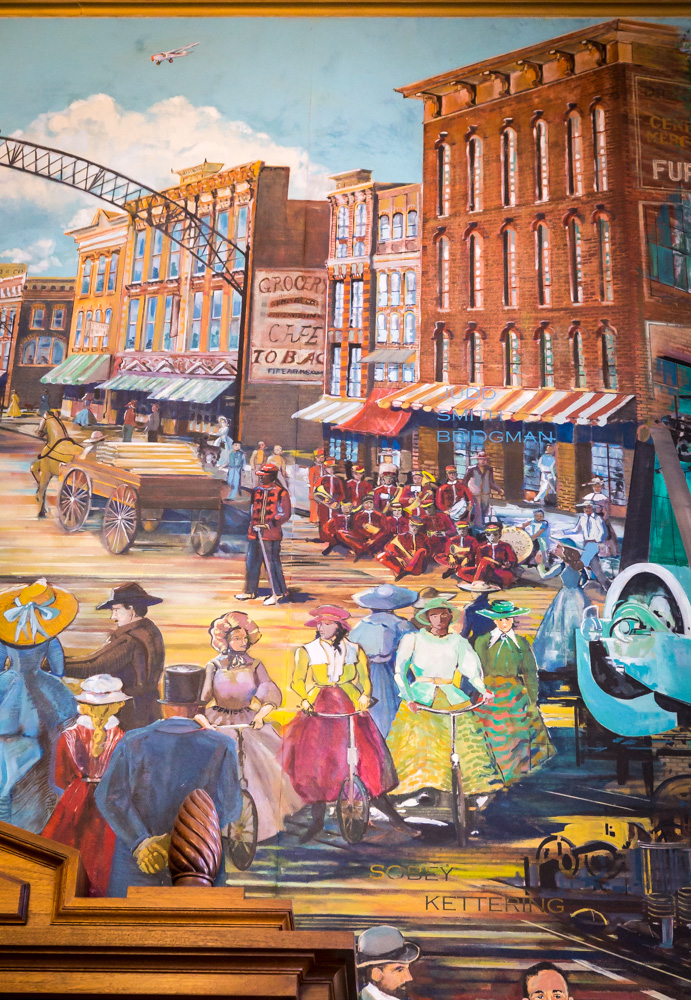 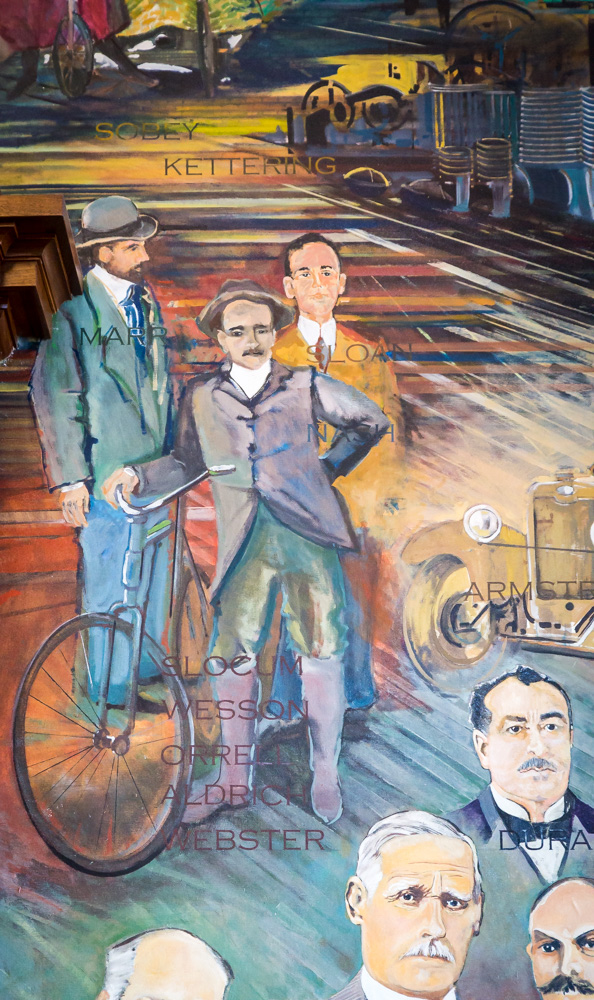 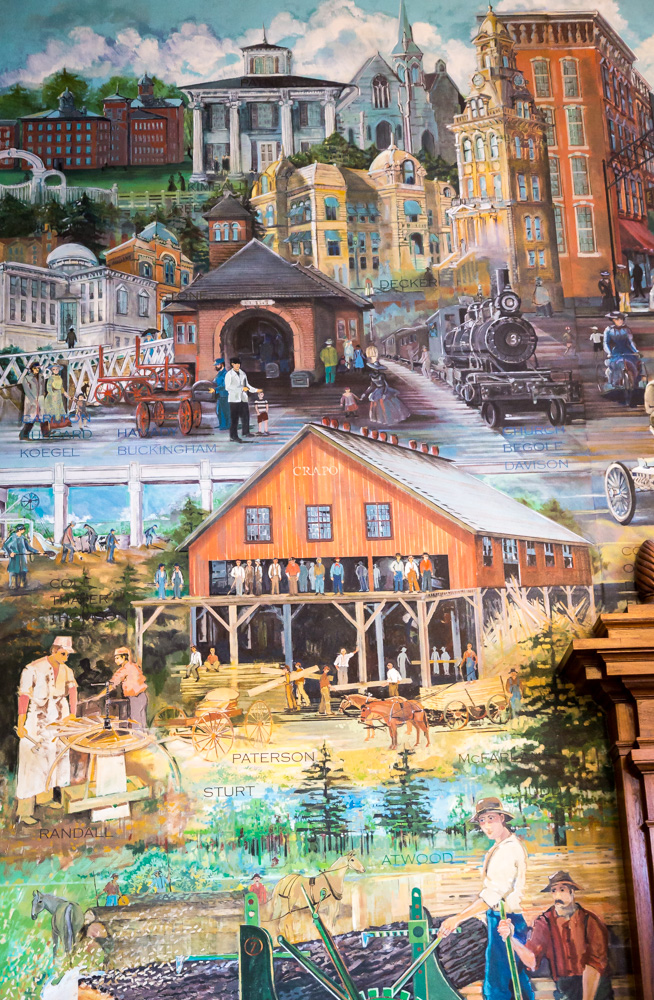 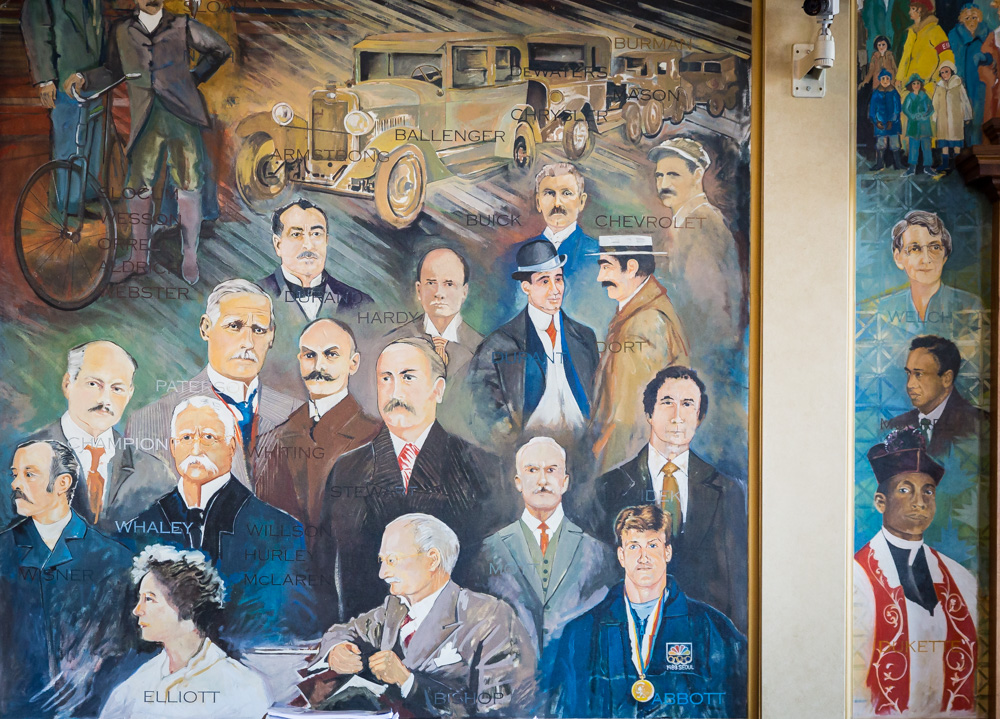 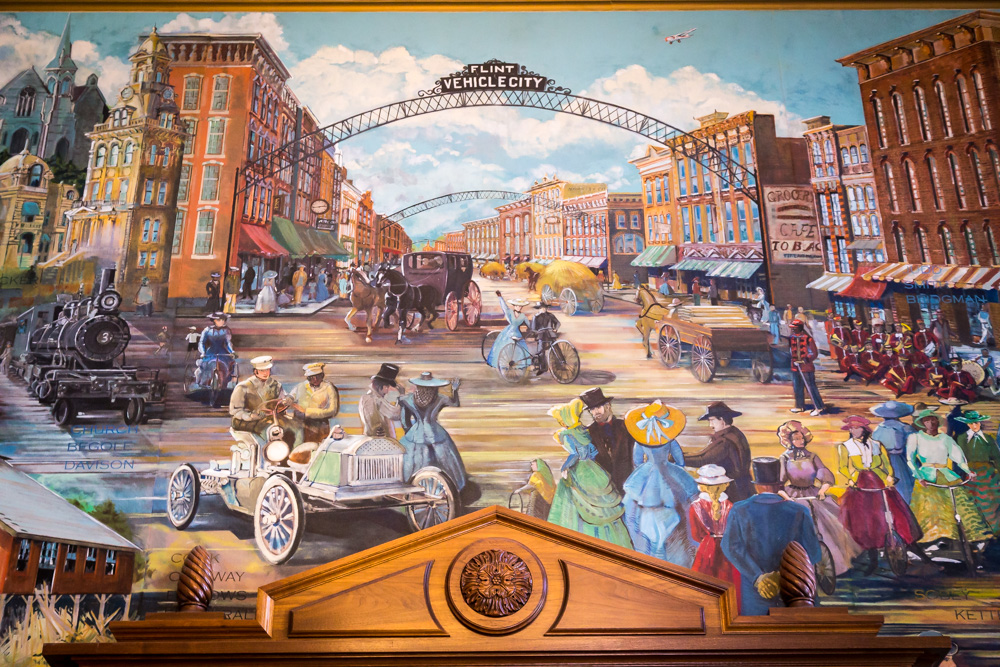 Judge Neithercut’s courtroom features a mural portraying the crossing of the Flint River at Saginaw Street. In an article of November 7, 1926, The Flint Daily Journal described that particular mural as being the “most interesting from an historical point of view.” The river crossing would later become the focal point of Downtown Flint. The mural also captured the culture and heritage of the Native Americans who lived in the area. Flint Founder, Jacob Smith, built his trading post near the crossing.

In Judge Duncan Beagle’s fifth-floor courtroom, on the non-historic side, the courthouse’s newest mural is displayed. With private funding from the Genesee County Bar Association, Genesee County Bar Foundation, the legal community and other benefactors, a mural was conceived that depicts the development of Genesee County through its small cities and townships. The mural was also created by Stefan Davidek and many talented members of his family, and depicts local leaders from various walks of life. It was formally dedicated on September 28, 2007.

Two early Davidek works were purchased at an auction in Lansing. In 2012, his family repaired the original frames and canvasses. They now adorn the walls of Judge David Newblatt’s fifth-floor courtroom.

During the Genesee County Courthouse restoration, a mystery was solved, according to Menear. The identity of the artist who created the three original murals had been unknown. Both Menear and Patsy contacted many art institutes, archival sources and libraries, as well as consulting newspaper articles. “We were a team,” Menear shares. “We did all the work.” A trip to the State Archives at the Michigan Historical Center in Lansing was made. On file were minutes from meetings in 1925 and 1926 of the Genesee County Board of Supervisors, which made reference to the courthouse construction. The name of the muralist, however, was not included in the materials.

Michigan State Capitol Historian, Kerry Chartkoff, was contacted, to draw upon her experience in discovering the identity of the muralist whose works adorn the Capitol Building in Lansing. For many years, the identity was unknown. Chartkoff suggested writing letters of inquiry to museums, historical societies and art institutes. Letters were sent to the Chicago Art Institute, Cranbrook Art Academy, Detroit Institute of Arts and others. Photos of the courthouse murals were included. When responses to the letters were not forthcoming, hope began to fade.

Shortly thereafter, and quite unexpectedly, an art conservationist from Chicago contacted Menear. The caller inquired as to whether there were Edgar Cameron murals in the Courthouse, as she was involved with the restoration of another Cameron mural in the Chicago area. The Genesee County Courthouse was said to be mentioned in the biographical information of Edgar Spier Cameron in the directory, Who’s Who in American Art. An immediate trip to the Flint Public Library and a rapid Internet search for similar works confirmed that Cameron painted the murals at the Genesee County Courthouse. Still unknown is how Cameron became associated with the mural project.

Flint native, Lavarne Ross, is an internationally known artist. His work often depicts a vision of his heritage and the community. Ross was employed by AC Spark Plug and Delphi from 1966-1998. His murals and paintings were displayed in the Delphi East complex, seen by thousands of workers. Some of the pieces even featured his co-workers as part of the subject matter.

In 2007, when it became clear that the Delphi East plant would cease operations, the question of what was to be done to preserve the various Ross artwork became important. By agreement of Ross and assistance from Delphi, the pieces are now displayed in the Genesee County Courthouse. The murals, which he painted in 1975, depict historical aspects of Michigan and Genesee County.

“The original Cameron murals, the Davidek era mural installations and the Lavarne Ross artistic contribution form a credible body of public art in the Genesee County Courthouse,” says Menear. “Three artists, intersecting with the Court at different times and under varying circumstances, come together to form a rich tapestry that adorns the courtrooms and corridors. The Genesee County Courthouse gratefully and graciously acknowledges their combined contribution.”
This is the last of the three-part series about the history of the Genesee County Courthouse, the Courthouse Square Project and the restoration of the original structure. Information for this story was obtained from Court Administrator Barbara Menear, and the Re-Dedication Events Commemorative Publication.
Photography by Eric Dutro