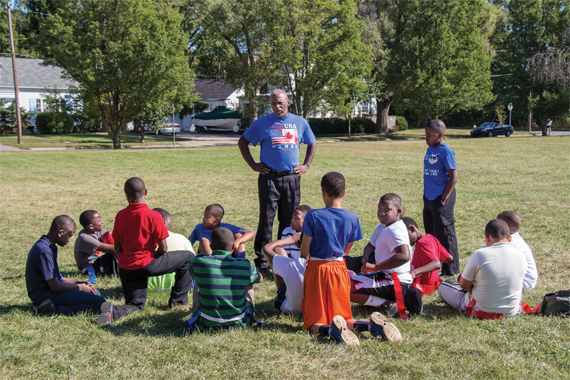 In a city of nearly 100,000 people facing the challenges of de-industrialization, stories of tragic loss and redemption are not wanting; the following is one of that kind. For those who know him, the name Sanford Hoyle evokes overwhelming joy. For those who do not, the subsequent account of Hoyle’s life will introduce you to this joy.

Sanford Hoyle was raised in Flint by a mother who struggled with drug abuse for the entirety of her adult life. Sanford remembers unwittingly assisting her with her drug usage from an early age. Not only was he unaware of what he was doing for his mother, he was also unaware of who his father was. Unfortunately, his mother was just as uninformed as he. She was a prostitute, and Hoyle, instead of inheriting a surname, inherited the louche title of “trick baby.” In such an unhealthy environment, it was only a matter of time before the authorities stepped in and placed Hoyle into foster care. In a cruel turn of events, however, his new home did not provide him a haven from tragedy: Hoyle suffered unspeakably horrific abuse, both mental and physical, at the hands of his foster parent.

In such circumstances, Hoyle says he had no hope. By early adulthood he had so much anger within that he retaliated against his circumstances by inflicting pain onto others. He used drugs heavily and became physically abusive to friends, family and strangers alike. No line was uncrossable for Hoyle, as he actively plotted to take the lives of innocent people. In a spiraling mental state, beyond the reach of help or reason or even caring, Hoyle hated life.

Then, one day, the Lord caught up with him. While walking alone, Sanford heard a simple question, spoken quietly out of mid-air: Don’t you know I’m real?

“People say to me, ‘You must have been on drugs when you heard this,’ but I hadn’t taken any drugs that day,” Sanford insists. Shortly thereafter, a coworker began witnessing to him at work. Hoyle slowly went from wanting nothing to do with the very thought of God to engaging with this coworker to the point where he decided to visit a church. That’s when it happened. Hoyle recalls his transformation in vivid, yet simple terms: “I went to a church service and gave my life to Christ, and instantly all the addictions, anger and torment went away.”

Delivered of his demons, he soon married, and had four sons. Life seemed perfect, but as so many believers can attest, it is when you declare yourself a child of God that trials of faith ensue. As suddenly as happiness had descended, it was snatched away: Hoyle’s wife left him, taking their sons and his joy along with her. Angry thoughts from the past flooded his mind once more, and he says that like Job, he asked God in despair,

Why is life given to a man whose way is hidden, whom God has hedged in?
For sighing has become my daily food; my groans pour out like water.
What I feared has come upon me; what I dreaded has happened to me.
I have no peace, no quietness; I have no rest, but only turmoil.

For four years, Sanford heard nothing. Then, word came that his wife had deserted the boys in Las Vegas. Hoyle was called by the Nevada authorities to pick up his children.

At this point in the story, the reader may ask, How could any man face these trials with peace? How could he trust a God who would allow such heartache? As the old saying goes, the Lord works in mysterious ways. We all hope that God can take the broken and turn it into something beautiful, and for Sanford, He did. Who better to address the needs of the countless neglected and abused children in our backyard, than he who has lived through it?

Today, Hoyle is one of Flint’s most honored men. He has received honors from over half a dozen different organizations in recognition of his work in the community, including laurels the likes of the City of Flint Human Relations Commission Youth Award and the Priority Children’s Champion Award. Since the late 1990s, he has played an active role in the success of our students who wrestle in the CANUSA Games, and has volunteered for afterschool programs for over ten years at several different Flint schools, including the former King Elementary, where he met his current wife, Sharon. “I got my second start in life at King,” Sanford remembers fondly.

Hoyle says of his accomplishments, “I’m a man with a ninth-grade education. People told me, ‘You’re never going to be anything,’ but now I look at where I’m at, with all the children I work with and the people I’m around. I sit with doctors and lawyers, people in high places with little-bitty ole me. Who would have thought?”

It wasn’t enough to help the community, however; Hoyle wanted his impact to hit even closer to home. He married Sharon, who had four children of her own, and the couple became foster parents. “We saw two little boys that we knew separated by the system, and we couldn’t do anything about it,” Sanford remembers. Since becoming foster parents, the Hoyles have adopted six children. Add 23 grandchildren and you’ve got a full Hoyle house. Sharon says that discipline balanced with love is the key to a happy—albeit noisy—household. “I have big pots,” she laughed, when asked how she fed all the children scampering through her home. Consistency is another theme in the Hoyle household: every Thursday, the Hoyle’s have family night, when they talk to, teach and listen to their children. Of course, life is not, and never will be perfect. Not long ago, four of the Hoyles’ grandchildren were tragically lost in one of Flint’s house fires, but the Hoyle family’s faith has not wavered. They press on, building a strong foundation at home and in the community. Balancing a home life with so many children and a public life working with youth would seem a daunting task, but Hoyle says he does it with ease. “You know why it’s easy?” he said, “Because I love doing it.”

Hoyle is quick to give credit to the spiritual fathering of Dr. Purvis Givens, founder of Prayer Gardens Church of God in Christ, and to the support of his wife Sharon. He says that Dr. Givens taught him how to be a gentleman, which has helped him tremendously in his role as husband. “By sitting under this man, I learned how to respect women. Today, I always open my wife’s door, and we hold hands when we walk. You don’t see too many 55-year-olds who still hold hands,” he joked.

Hoyle says that when it comes to children, he “ain’t too proud to beg.” He has raised thousands of dollars through public and private charitable organizations to give gifts and fun trips to local kids. Hoyle challenges adults in the community to take the lead in making a positive impact, and he challenges parents to carry out their parental responsibilities. He’s known for telling it like it is, and many parents who are at first put off by his frank speech very often wind up taking his suggestions to heart. Speaking to the importance of parents taking responsibility and leading in the home, Hoyle states that the best place to create long-lasting change in Flint is in the home: “if we don’t reconstruct our homes, things are going to get worse,” he says. The reader is left with the following reminder from a man who has lived through the worst and is now dedicated to bringing out the best in others. “In order to see something positive, it starts with us adults. Our children are our future, but they have no future without us.”

Are you interested in purchasing photos from this story? Go HERE and select the “Coach Hoyle” category.