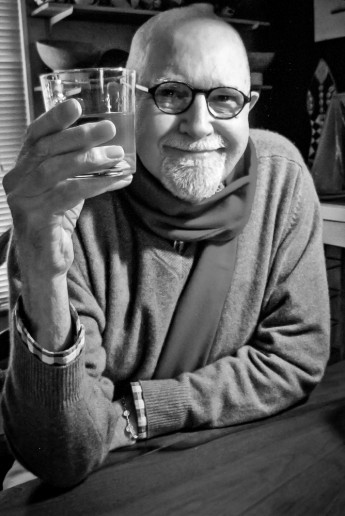 Doug Warner (1930-2013) is remembered as an authentically humble artist who was both elegant and down-to-earth, and his work and life impacted the Flint community. Notably, he created the original Mott Community College (MCC) logo, still used by the school today. Warner’s work was shown steadily in galleries both locally and around the world. According to Patty Warner, his wife of 32 years, he didn’t like going to his own gallery openings, because he preferred that the focus be on his work, not him. Tall and carefully dressed, Warner naturally made an impression when he went out, but preferred to stay home and prepare elaborate meals for his close friends. In his time spent in Flint, Warner’s creative pursuits and ideals helped cultivate growth in the local art community.

“He cherished his students and some of their work is on his walls.”
PATTY WARNER 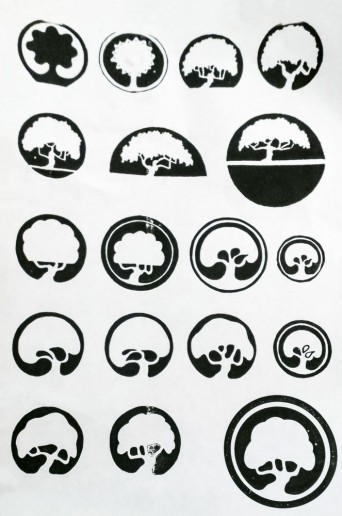 Warner began teaching in the Art Department at Mott Community College in 1957 when it was still called Flint Junior College. For 29 years, he taught courses on sculpture, drawing and design and also spent 1963-1966 as chairman of the Art Department. “Doug was known for being a really tough teacher with high expectations for his students,” Patty recalls. “They were required to take their art study seriously.” Warner became a mentor to many students who continued on to become lifelong, working artists. “He cherished his students and some of their work is on his walls,” she adds.

When MCC approached him to create a logo for the school in 1972, Warner hand-sketched a series of simple, clean designs based on the idea of the apple tree – a nod to MCC’s beginnings on 32 acres of the Applewood Estate. Warner used the tree as a symbol of education and growth, as well as representation of the apple trees on Mott Farm. Patty held onto his original sketches, showing how Warner went from one idea to the next, improving and honing in until he was happy with the design. Because of his humble nature, although he created the MCC logo and cherished his time teaching there, Patty insists that her husband never owned anything with the logo on it, until a friend gifted him a shirt late in his life.

During his tenure at MCC, Warner was still consistently producing and showing his artwork in numerous locations including the Smithsonian Institution, Library of Congress, British Museum, University of Iowa, Nebraska, and his home state of Oklahoma, as well as the Universities of California and Colorado, among many others. At least every two years, he had major gallery shows in the Xochipilli Gallery in Birmingham, MI until Xochipilli closed its doors during an art recession in the 80s. Warner’s commitment to his craft never wavered.

His Art and Creative Process

Warner’s artwork has a notable presence. Several of the larger pieces from his Notations series are displayed at The Good Beans Café in Flint. “The response has been incredible!” Café Owner, Ken Van Wagoner exclaims. “In 17 years, I have never seen people react the way they’re reacting – there is something to this, it’s noticeable how patrons are stopped in their tracks.” Warner’s work elegantly commands a space, slowly drawing the viewer into its layers of texture. The stately pieces were crafted using acrylic paint and vermiculite, a porous mica product that forms a rough, almost sand-like, texture. Each painting had an average of 3-5 layers of the acrylic/vermiculite blend which were placed, then altered for his desired effect. Additional texture was added with swipes, digs and “Xs” created by Warner’s handmade painting tools and brushes. His thumbs pushed into the layers added a dappling effect to some of his paintings. Built into much of the Notations series are elements such as sticks and string, pistachio shells, bird feathers, bamboo and metal. He assembled these intriguing materials and made connections that continue to capture the curious eye. 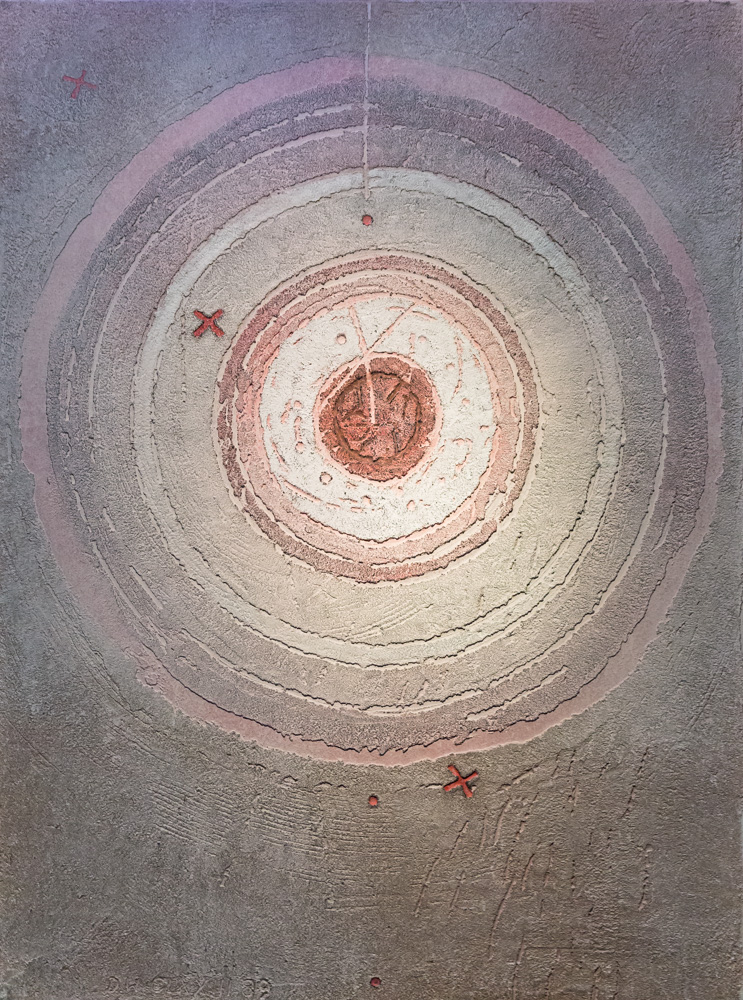 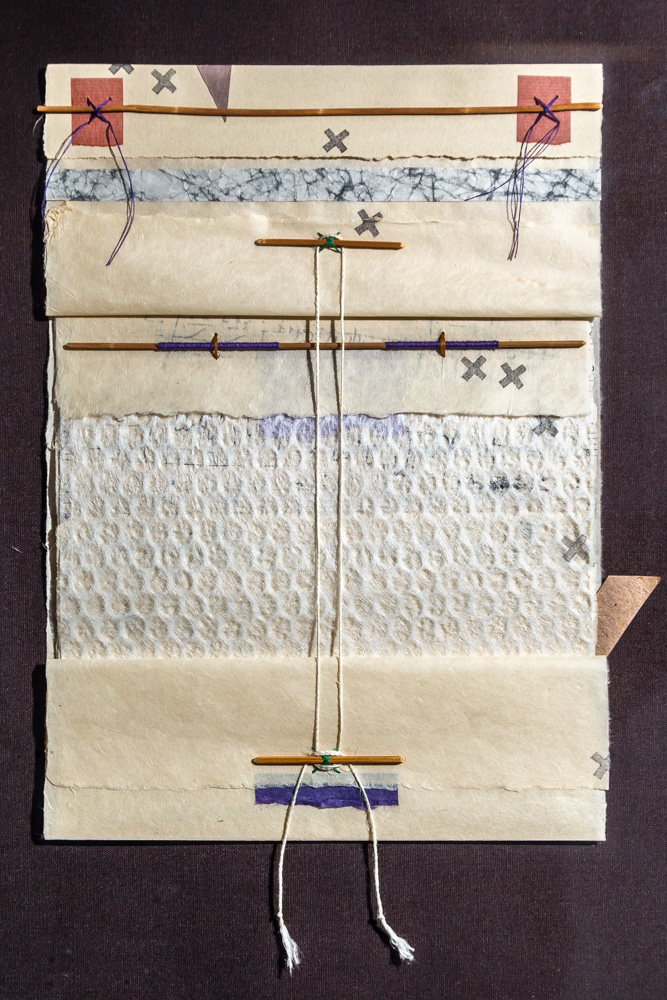 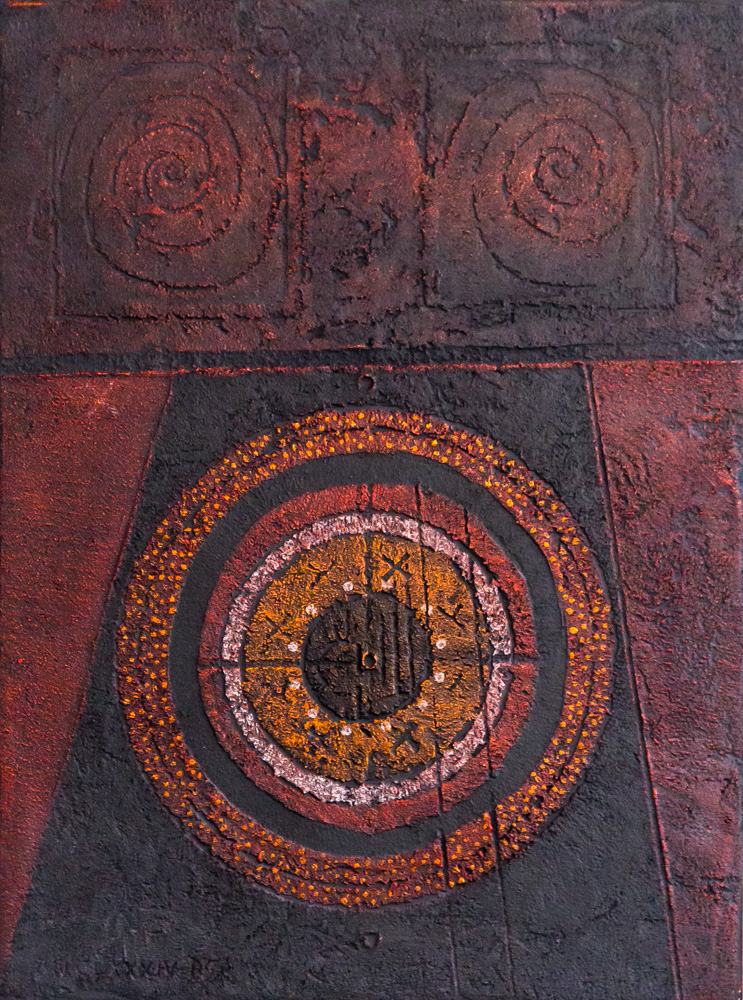 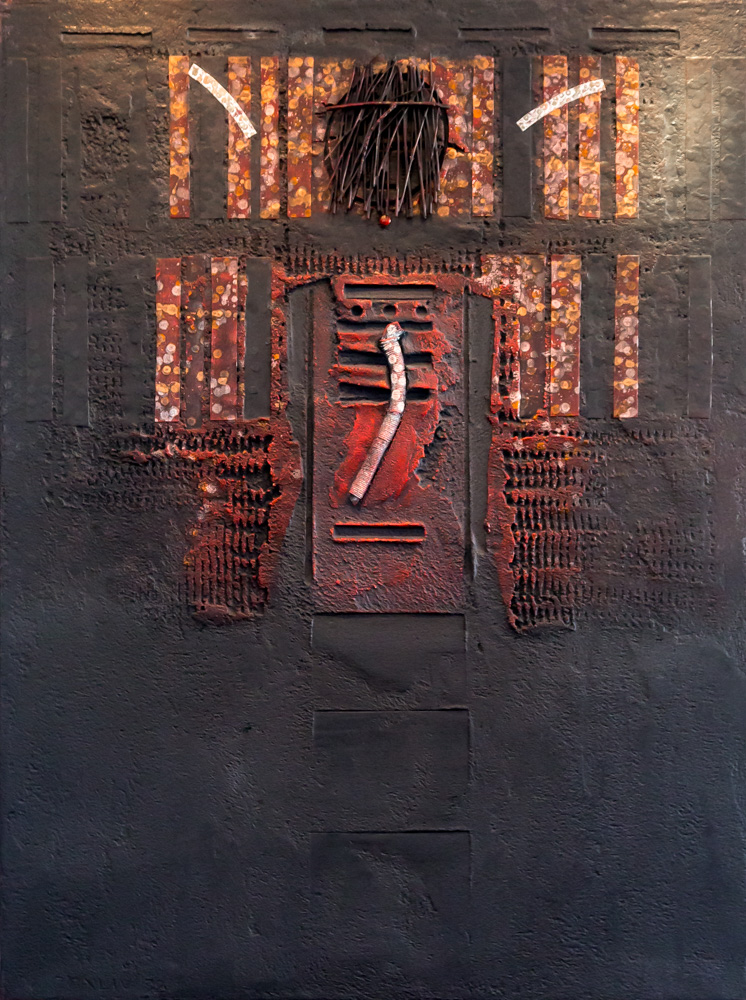 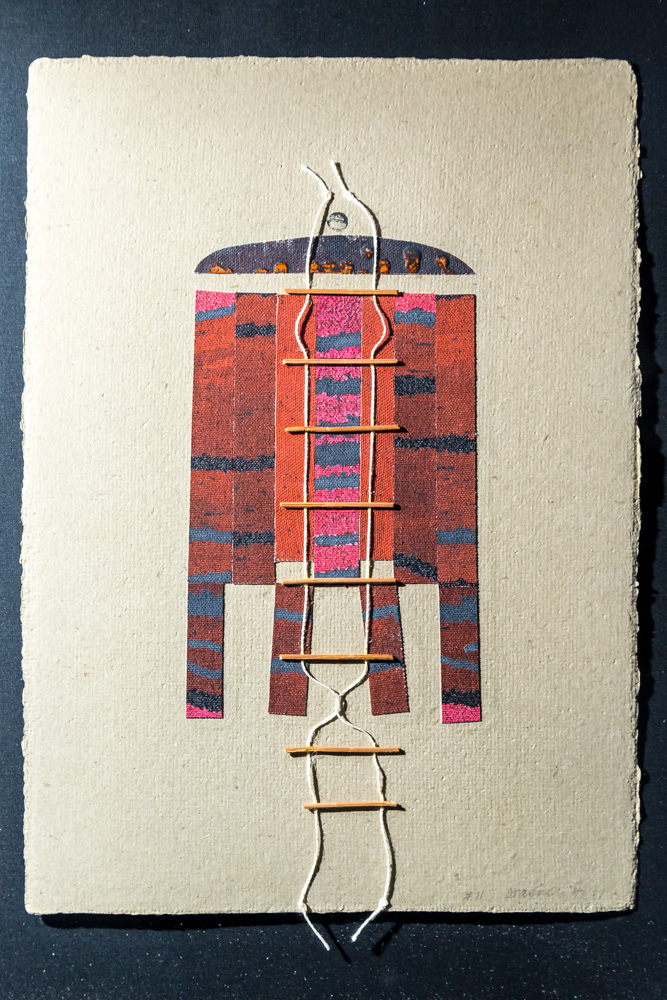 Wanting viewers to experience and respond to his finished pieces for themselves, he avoided imposing his ideas or motivations onto the viewer – they were encouraged and affirmed by whatever they got out of it. Rather than a viewer saying, “I don’t get it,” he insisted that their natural, honest response was valid. “Doug knew what he was doing with a piece – for him,” Patty explains, “but, if it simply reminds you of a child scratching the sand, great!”

According to a press release from Warner’s 2001 show at Buckham Gallery, his works “draw inspiration from the shards and ghosts of the bygone cultures of the American Southwest.” Other Influences that can be found in Warner’s work include his affinity for tribal art and love for classical music. He was inspired by Beethoven’s manuscripts, and this is especially evident in some of the later pieces from his Book series, which features layers of paper scrawled with musical notes.

Warner was also drawn to ladders, which factor into many works. In his own artist statement from 1998, he writes, “I cannot explain the ladders that populate my works. They first appeared as haunting possibilities, mere hints that their sequences should be followed, that they would make fascinating dance partners, connecting past with future. But they have yet to reveal their other faces to me. They are coquettish, elusive, seductive.” The ladders that play in these pieces begin and end without explanation, floating in some of them, as if representing unknown segments of time and space, inviting the viewer to wonder. Layered together, these somewhat mysterious details work to engage the viewer and only add to the fascination Warner’s work inspires. 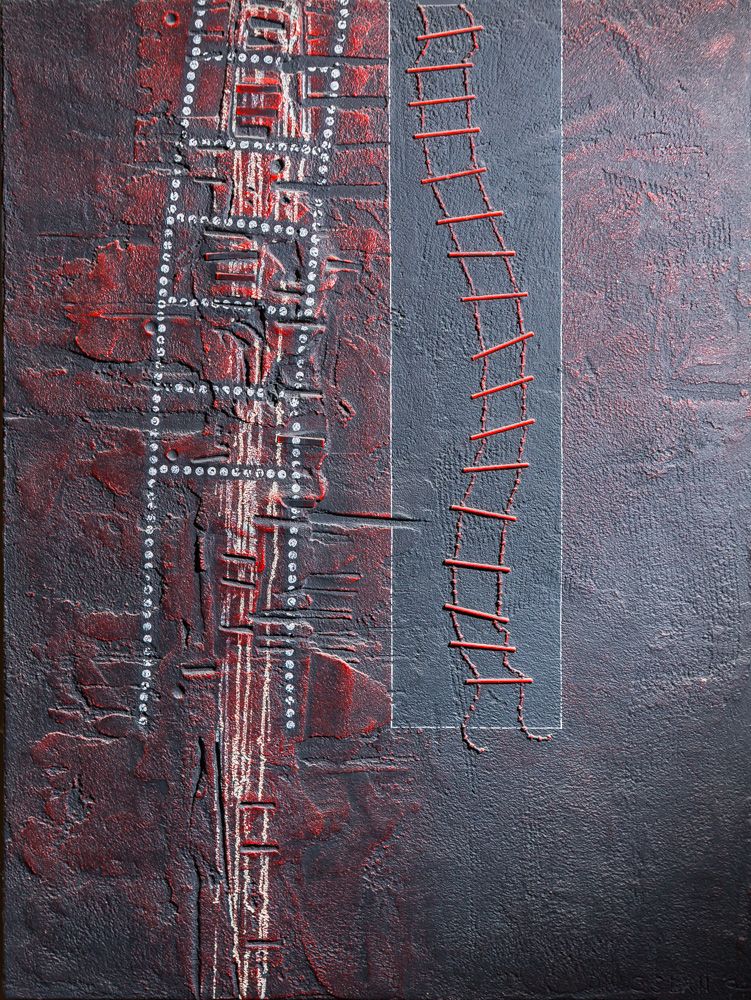 Ties with The Torch and Buckham Gallery

After retiring from MCC in 1986 to become a full time studio artist, Warner remained the Gallery Coordinator there. During that time, he spent entire days painting in a studio above The Torch Bar & Grill, a Flint hotspot located in Downtown’s Buckham Alley. At that time, a former student, Gary Gebhardt, operated The Torch and rented Warner the space upstairs. “It was his sanctuary,” Patty says. “It was wonderful for him.” Also an art teacher, she would get up around 7am to go to work, and he would go to the studio to work the entire morning and afternoon. There, he would stretch one or two canvases at a time, always having at least one work in progress. Then, Warner would begin the time-consuming process of building layers of texture. According to Patty, he would put the first layer on, then sit down in his favorite rocking chair, smoke his pipe, play his banjo, rock and look at the piece while it dried. “Then, he would scrape the color, wipe it away – that’s how he got all the glowing colors,” she says. He would work on a few pieces, set them aside and move onto another, then go back to work on each piece until he felt it was completed.

Right around the corner from Warner’s Torch studio was Buckham Gallery, founded in 1983 by some of his close friends and colleagues, including Sam Morello, Bob Caskey, Tom Nuzum, Gary Gebhardt, Jan Murdock, and Jim Anthony. “Doug’s friends wanted him to run the gallery with them, but he only wanted to help behind the scenes,” Patty says. Rather than be at the forefront of the Flint art scene, Warner was an inspiration and influence to local artists who grew into a close-knit group of friends.

Creating as a Lifestyle: Exquisite Food and Friends 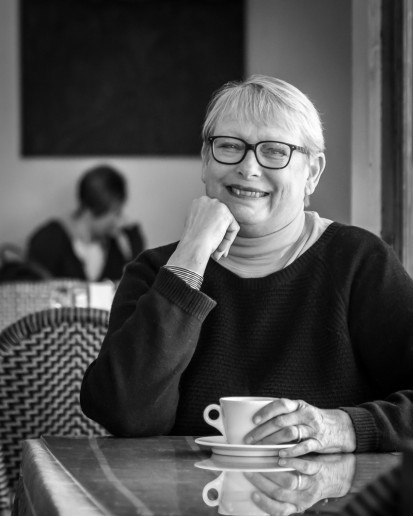 Warner preferred inviting friends over for homecooked meals, rather than going out to eat. One of his favorite authors, Jim Harrison, wrote in The Raw and Cooked: Adventures of a Roving Gourmand: “A host who pampers me in his own pad with his own sauces and cigars in person, as required by la belle tradition, charms me far more than the lazy lord who invites me to an expensive restaurant boasting many stars.” This was one of Warner’s favorite quotes by Harrison, and he lived it. When he cooked for friends in the Warners’ Flint home, he would spend days prepping and crafting meals that featured dishes such as whipped feta with cucumber, pork belly, jasmine rice and pickled onions, slaw, and red pepper mousse, or another example: blue cheese dip, white grape gazpacho, lamb shanks with hard polenta, celery root salad and Pandemonium Ale. Taped to the cupboard in the Warners’ home kitchen are layers of notepad paper with handwritten recipes and plans for dinner parties – another testament to how he put care and effort into making something elegant and memorable from simple things.

Doug Warner was not in a hurry; instead, he lavished time on meaningful pursuits. With specialized care, he grew orchids and maintained bonsai, arguably some of the most difficult plants to grow and shape. He valued immersive pursuits that required generosity, as evidenced by the contemplative way he approached his creative process. His interest in infusing life into his work is shown not only in his art pieces, but in a life that was filled with creativity, craft and close friends. Those interested in Doug Warner’s pieces are invited to contact Patty Warner at stixdesign@sbcglobal.net.