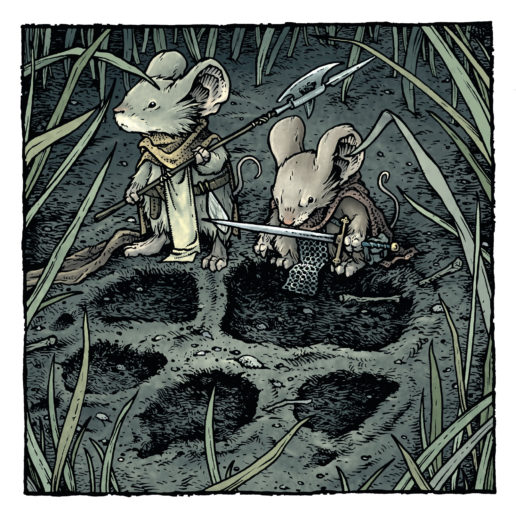 When David Petersen finished writing and illustrating the first issue of the Mouse Guard comic book series for the Motor City Comic Con in May of 2005, there was no way he could have known where it would lead. “I thought I would simply self-publish the series for a time,” he recalls. “I thought I would sell Issue 1 and use that money to print Issue 2, and just keep doing it that way. I was sure it was just going to be a weird, square-shaped book about mice that nobody would want to publish.” Talent is always recognized, however, and after 15 years of Mouse Guard, David Petersen is a household name in the graphic novel industry. Mouse Guard is revered by thousands of fans, so much so that a movie is being shopped around in Hollywood. “We would like to see it happen.” he says. “The first screenplay is based on Fall 1152 (the first Mouse Guard graphic novel). It would be very cool.”

Petersen makes a living drawing adventures, and his own started in the small woods and trails in and around Flint’s East Village near Pierce Elementary School. “We had boundaries we weren’t allowed to cross, like Court Street and Robert T. when we were older,” he said with a laugh. “When Pierce Park Golf Course shut down for the winter, it became a big park for me and my friends. We spent our time building forts and forging paths there. I had grand adventures – some real and some of them only in my  imagination. It really formed who I was.” From those early experiences grew a love of nature that dominates Petersen’s art and storytelling. His pages are always full of lush and vibrant forest scenes. “There were woods behind the golf course where people rarely went. When we were there, we felt like we were in the middle of nowhere. We had to find our own safe passages and build our own universe,” he states. “I think my books have a lot to do with that experience. Mouse Guard is about forging paths and finding safe ways for mice to travel from here to there. The mice are pioneers in a way, and so were we.” 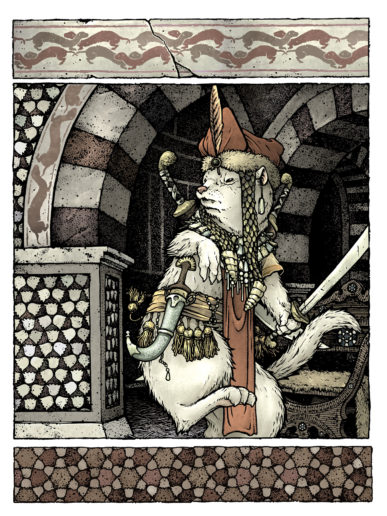 While attending Flint Central High School, the idea that would become his profession was born and it was due to his unique style of art. “In high school, I wanted to do comics, but when I looked at what was popular, I just didn’t have the chops. What I drew looked a lot like the art you would see in children’s books. There was a little more innocence,” Petersen explains. “For instance, I liked drawing monsters, but they weren’t vicious things – they were more like Muppet monsters.” The idea to do a talking animal comic became a way for him to tell the stories he wanted, that worked best with his art style. As he began to fine-tune his ideas, he also fine-tuned his expertise. He took additional art classes at the Flint Institute of Arts while in high school, and after graduation furthered his education at Mott Community College. “It seems like I just kept upgrading to the next building over,” he laughs. “I learned a lot at Mott from a teacher named Sam Morello who taught 2D design. At first, I was lost – I didn’t really understand the purpose of the class until about three quarters through, when it finally clicked. I realized that he was teaching me how to manipulate art at an atomic level. Now, when I do my illustrations, I apply that lesson.” With more knowledge in hand, Petersen transferred to Eastern Michigan University with plans of becoming a children’s book illustrator. Choosing that school would be a fateful decision. 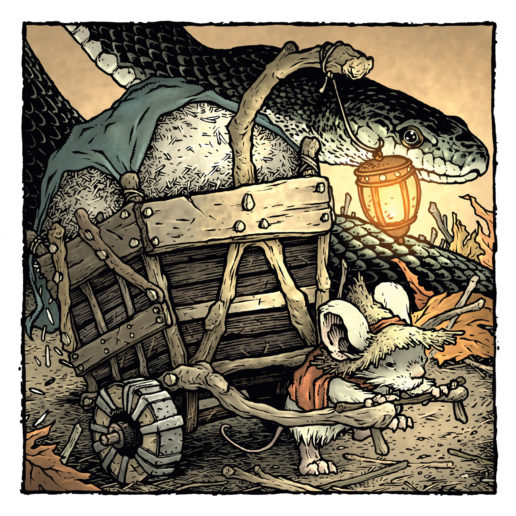 While working toward his degree, Petersen decided to dust off his high school concept for a talking animal comic. He found that his idea, along with his skills, had matured into something new.

“My first idea was to treat the animals like Disney characters – they were like people in size and temperament. In college however, the idea was to treat animals like actual animals. They would still be slightly anthropomorphic, but all the size relationships would be actual,” he explains. “I wanted to treat every species like Tolkien treated races – each with its own style, traditions and language. It just got to be too daunting.”

He started to place limits on the number of animals and worried how he would keep the smallest ones (such as mice) alive throughout the book.

“When Hobbits come out of the shire, the other races all laugh at how small they are, but they don’t eat them. When a mouse came out of hiding, the foxes and larger characters would laugh at them and then have lunch,” he remarks. “Once I started thinking about that, I realized that I had to create a culture for mice that would allow them to survive, and a thing called the Mouse Guard was born. I realized that the Mouse Guard was the story. That was it. Everything else fell to the backdrop as either environment or potential adversaries.” After finding focus, everything clicked into place. The Mouse Guard became the organization that protects mice traveling from city to city through predetermined paths. Everything is told through the eyes of the mice and the book is full of epic battles, in-depth characters, trials and deception. All of it is inspired by Petersen’s time playing in the woods in Flint, playing Dungeons and Dragons, and experiences he had as a Boy Scout. “One of the main characters, Saxon, has a cloak with a knot that ties into two tails. I did that because of the Scouts’ neck kerchief,” adds Petersen. 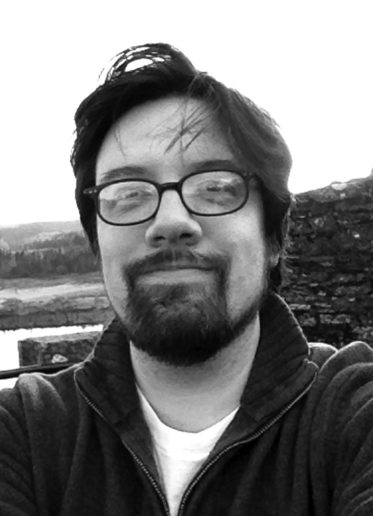 “We spent our time building forts and forging paths there. I had grand adventures – some real and some of them only in my imagination. It really formed who I was.”
David Petersen 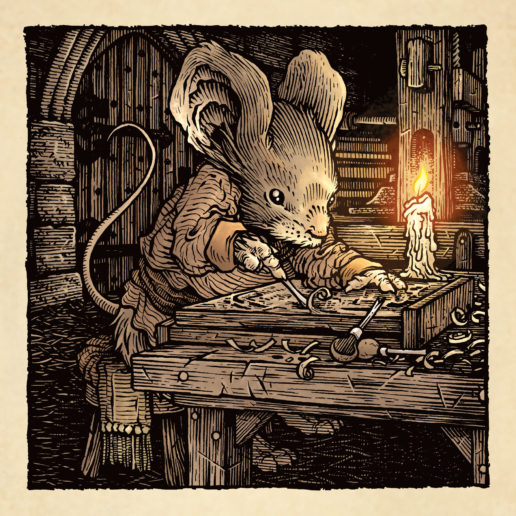 till, he had no real aspirations for Mouse Guard besides his illustrations and, maybe someday, making a comic on the side. His focus continued to be on children’s illustrations until a conversation he had with another artist attending EMU. Jeremy Bastion, a friend and fine artist in his own right, told Petersen that he should set up a booth at the Motor City Comic Con to possibly sell some original drawings. Petersen reluctantly agreed, and arrived at the event with a load of original art which included some preliminary Mouse Guard illustrations. “People kept asking me, when they flipped through my stuff, when the book for Mouse Guard was coming out. At first, I told them that there wasn’t a book but after numerous people asked, I realized that I was missing an opportunity,” says Petersen. “I started telling everyone that the book would be ready at the next convention. I committed to doing the first issue in six months.” Petersen got it done and sold out at the 2005 Motor City Comic Con. At the San Diego Com-Con two months later, his fate was sealed. 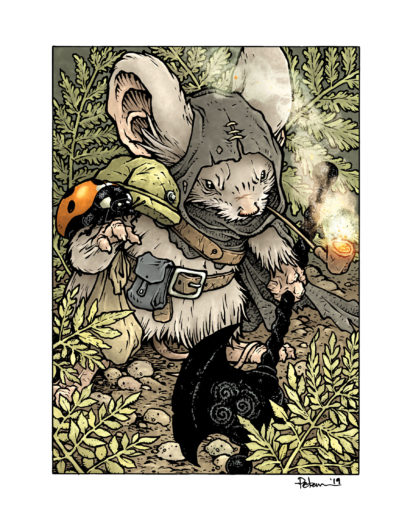 While attending the convention as a tourist, he ran into a comic journalist he had met in Detroit. The man told Petersen that he should attempt to sell publishing rights to Mouse Guard, perhaps try one of the smaller publishers. Petersen was skeptical. “I said ‘okay’ but I was being a little dismissive. He told me to try Archaia – a new company founded by Mark Smylie, an artist. Years before, I asked Smylie to critique some of my art and he really helped me. I had a few copies of Mouse Guard on me, so I sought him out. I didn’t think he’d want to publish it.” The next month, they had a contract.

Since that day, it has been a whirlwind of success for Petersen. The book has won Eisner Awards in the “Best Publication for Kids” and “Best Graphic Album-Reprint” categories and the Harvey Award for Best Graphic Album of Previously Published Work in 2014 & ’15. His creation has spawned a toy line and a highly sought-after Mouse Guard role-playing game. “The role-playing game is very cool – my friend, Luke Crane, and I devised it,” explains Petersen. “When the first couple issues of Mouse Guard came out, fans were asking if it was based on a game. Because of that response, I knew it was something that fans were ready for and it’s been a huge success.” 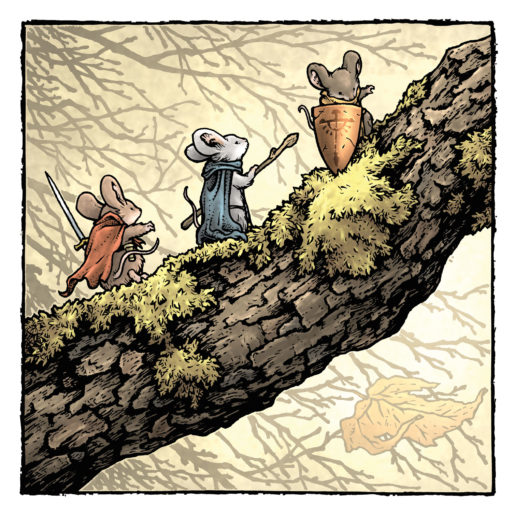 While working on Mouse Guard, Petersen has also found a way to share his talents with other comic titles. He recently drew covers for Teenage Mutant Ninja Turtles and The Dark Crystal.

The next step for Mouse Guard is a movie and it has been brewing for a while, according to Petersen. “Talks for a movie are in the really early days – numerous attempts fizzled out. The problem is that Mouse Guard is an all-ages comic and it was really hard to get anyone in Hollywood to understand its tone,” he explains. “Then, Archaia was purchased by Boom! Comics and they had a first-look deal with Fox. When I met with the VP at Fox, he had all the right answers.” The movie was green-lighted by Fox and filming was set to begin last month, but Disney (which owns Fox) cancelled the film at the last minute. “There is still some hope of getting it set up at a new studio,” says Petersen. 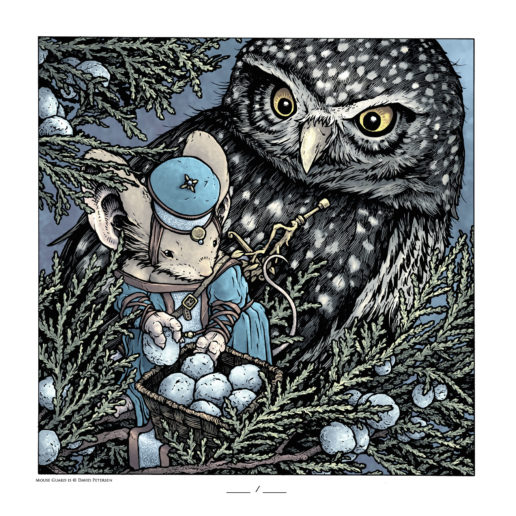 While he is excited about a movie being made, Petersen has been chomping at the bit to get back to Mouse Guard. “I have had so much going on and now, I am a full-time caregiver for my mother who has Parkinson’s disease and dementia. It’s slowed me down quite a bit, but I’m finally ready to start working on the next installment of Mouse Guard,” he says. “I have so many new ideas, but now is not the time for that. I can’t jump ship on Mouse Guard right now. I am going to work my butt off on it for the next couple of years and I can’t wait to get started.”

David Petersen never expected that his imagination, a childhood in Flint and a few illustrations of mice would add up to this. All he wants to do is work on his creation – each issue giving us just a little glimpse of a world created long ago. While reading Mouse Guard, it’s easy to envision a young David, running through the woods, brandishing a stick as a sword, forging new paths and living in the world of his own design … dreaming up stories of heroes and villains and their grand adventures.

If you would like to know what David is up to,  visit his blog at davidpetersen.blogspot.com/