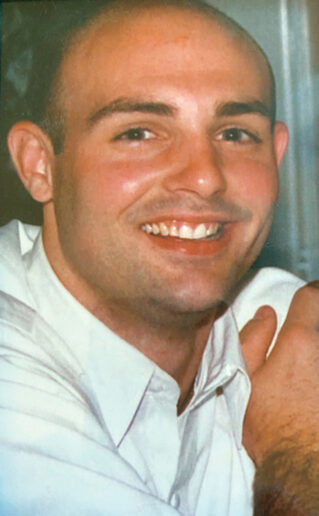 Eric Bennett never tired of taking in the view of New York from the balcony of his brownstone in Brooklyn’s Park Slope neighborhood.

There, he was at peace.

Most days, the Flint Kearsley graduate could clearly see the World Trade Center’s twin towers, a little more than four miles away in Lower Manhattan, while reflecting on the career he was building with Alliance Consulting Group on the north tower’s 102nd floor.

As the summer of 2001 drew to a close and his 30th birthday approached, the affable, outgoing and ambitious Bennett had been living in the Big Apple for nearly six years and had already risen to the rank of vice president.

That was only his most recent accomplishment.

Growing up, Bennett found success in many sports, lettering in football, track and wrestling at Kearsley and exhibiting unmistakable leadership skills from an early age. Despite a lanky, 6-foot-1, 185-pound frame, he walked onto the football team at NCAA Division 2 Ferris State University, eventually becoming the Bulldogs’ starting center and earning honorable mention all-conference honors.

Not long after graduating, Bennett arrived in New York and soon realized the city was a perfect match for his unique personality and skill set. He reveled in serving as a tour guide for visitors from his home state.

“New York fit Eric to a tee, because the city is always going,” says his mother, Betty. “That was Eric – always going.”

Bennett indeed embraced the bustle of New York’s boroughs and was happily navigating through it while commuting to work under blue skies on the picturesque, sunny morning of September 11, 2001. Arriving at his office to a typical Tuesday schedule, Bennett began conducting a sales meeting some time before 8:30am. There was no way of knowing it was the day that would forever change America. 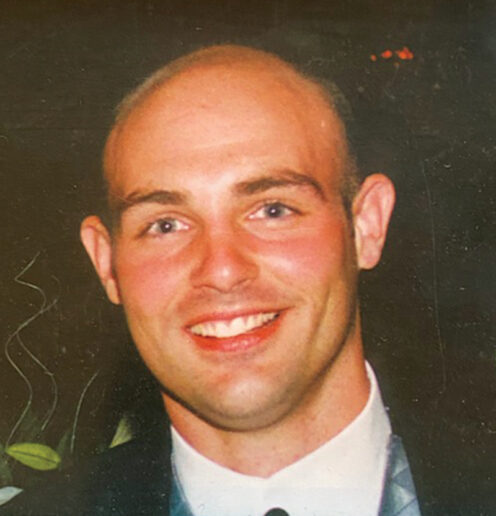 “The one thing I don’t want people to forget about Eric is that he was a special person. I feel that he gave his life for his country, though not by choice.”
Betty Bennett

As Bennett led the meeting, hijacked American Airlines Flight 11 with 81 passengers and 11 crew members aboard was flying at a shockingly low altitude, heading straight for the World Trade Center. At roughly 8:46, Bennett and his colleagues were jolted by the violent impact of the plane striking the north tower not far below them between the 93rd and 99th floors.

Remaining calm, Bennett called the company’s main headquarters in Boston to report what happened. Minutes later, a second hijacked airliner struck the south tower. During the next 90 minutes, another plane was flown into The Pentagon in Washington, D.C., a fourth was hijacked over Ohio before crashing into a Pennsylvania field and both World Trade Center towers collapsed.

Bennett’s family and friends were in disbelief. “As soon as I heard about the first plane flying into the tower, I knew Eric was there,” Betty recalls.

Doug Arnold, the quarterback Bennett snapped the ball to and protected at Ferris State, also knew as did then-Ferris football coach Jeff Pierce, who was defensive coordinator when Bennett played there, and Pierce’s wife, Suzie.

All four repeatedly called Bennett’s cell phone. Arnold’s wife eventually learned from someone at Alliance’s headquarters that Bennett had left a voicemail message stating he was safe and attempting to evacuate the building.

Tragically, Eric was not heard from again. He is the only Flint-area victim of the 9/11 terrorist attacks.

The passage of two decades has done little to lessen the Bennetts’ pain of senselessly losing the bright light they are proud to call their son.

“Eric was very driven, intelligent and outgoing his entire life,” Betty says. “The one thing I don’t want people to forget about Eric is that he was a special person. I feel that he gave his life for his country, though not by choice.” 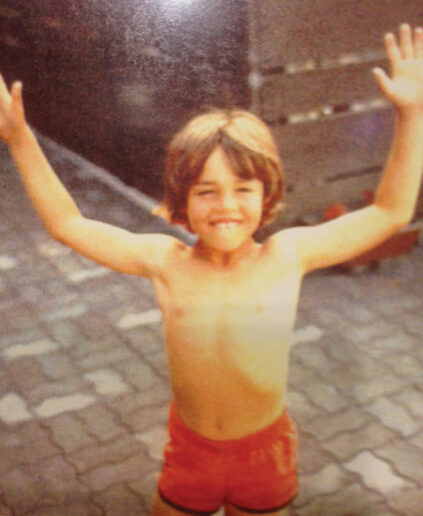 Clinging to hope in the immediate aftermath of the attacks, the Bennetts drove to New York in search of answers. They met with some of the many people who knew Eric along with representatives from Alliance Consulting. The company paid lodging costs for loved ones of missing employees who traveled to the city and provided grief counselors.

“They also hired a car to take us to the hospitals so we could be assured that Eric wasn’t one of the John Does being treated there and, unfortunately, he wasn’t,” Betty recalls. “When we met people in New York after 9/11, everyone talked about how Eric’s smile would brighten any room.”

The Bennetts also put up posters with Eric’s photo and listing his tattoo of a bulldog, Ferris State’s mascot, which also featured a dog tag that read 58, Eric’s jersey number. The posters also noted stretch marks on his upper body, the result of Bennett dropping from a muscular 255 pounds to 180 following the end of his college football career.

Unfortunately, the Bennetts returned to Michigan without most of the answers they were seeking; but, along with daughter Kim, put together a video of Eric’s life which was shown at a gathering of more than 400 people at Kearsley High School on October 14. Many honored Eric by wearing the same tattoo as his.

“Eric was a great person who had really moved up in the business world because of his hardworking approach,” Jeff Pierce said in a statement released by Ferris State following the attacks. “Eric was a part of our Bulldog family. When something like this happens, it really hits close to home for a lot of people. Sometimes it doesn’t sink in until you realize how many people have been affected by a situation like this.”

While humbled by the outpouring of support, the Bennetts were left wondering if they would ever find answers or experience any kind of closure.

Roughly five months after returning from New York, they finally did. Terry and Betty were notified that some of Eric’s remains had been found.

Eventually, Betty opted to have LifeGem, a Chicago-based company, create two diamonds from carbon extracted from Eric’s ashes. One is contained in a pendant his sister had made and the other is set in a ring Betty wears daily. “It makes me feel that Eric is always with me,” she says. “It’s peaceful.”

Reflecting on the full life Eric lived during his 29 years also brings the Bennetts some peace.

“Eric was a very busy, loving child and also very protective of Kim,” Betty recalls. “From a young age, Eric played a lot of sports. In elementary school, he bowled and was always outside playing baseball, basketball or riding his bike “

In addition to the sports he earned varsity letters in, Bennett played basketball and baseball for some seasons in middle school and high school. He spent many summers on little league baseball diamonds. 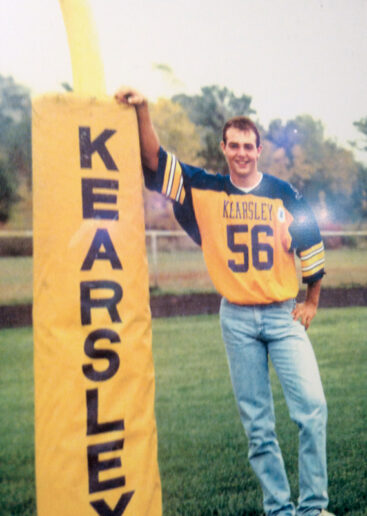 The gridiron, however, is where Bennett excelled the most.

At the time, Kearsley was coached by the legendary Jack Pratt, who racked up a Flint-area record 304 wins with the Hornets, Grand Blanc and Powers Catholic. Recognizing Bennett’s leadership ability, Pratt selected him to serve as co-captain of the 1988 Kearsley squad which captured the Big Nine Conference championship, earned the program’s first-ever playoff berth and finished 8-2.

Betty watched every game from the bleachers while Terry treasured his closer view of Eric’s exploits as a member of the yardage chain crew during home games. Their attendance at Eric’s games did not waver when he began suiting up for Ferris, more than two hours away. Some of his road games required an even farther drive.

“Football was Eric’s passion and he worked so hard to earn his spot on the Ferris team,” Betty says. “Terry and I were at all of his sporting events. During his senior-year banquet at Ferris, he said it meant the world to him to know that he could always look up in the stands and know we were there. We still miss going to his games and all the good people we met.”

Bennett, whose playing time gradually increased as he became stronger and proved himself, started his final two seasons with the Bulldogs. As a senior, four years after helping Kearsley to its first playoff appearance, he did the same for Ferris as the team qualified for the Division 2 postseason, won the Midwest Intercollegiate Football Conference championship and finished 10-3. He was one of seven Ferris players who earned all-conference recognition that season. 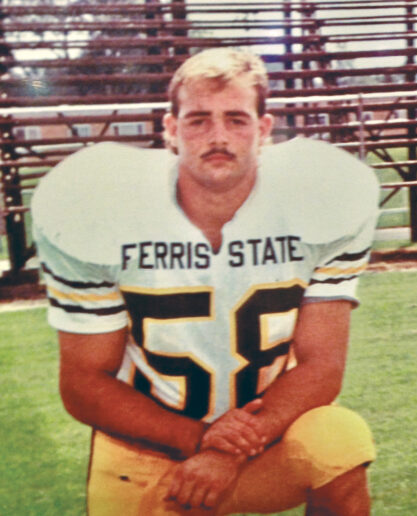 In the spring of 1993, Terry and Betty watched their son graduate from Ferris with a computer information systems degree.

On the 10th anniversary of the attacks, Marty Parshall, one of Bennett’s Ferris teammates, posted a heartfelt message in the memories section of his obituary on Legacy.com.

“Eric Lee Bennett was my best friend at Ferris State and for many years after,” Parshall wrote. “Eric is someone I try my best to live my life by. Eric always had a great time, always had the biggest smile on his face and could make you laugh until you absolutely cried! He was the best friend anyone could have and will never, ever be forgotten! He was in my wedding and was the life of the party, as always!”

While pursuing his goals, Bennett still found time for travelling, another passion. He experienced Brazil, Puerto Rico, Rome, London and Paris, among other places.

In 2011, Betty, Terry and 16 other family members returned to New York for the dedication of a 9/11 memorial at the World Trade Center site. Betty and several close friends attended the dedication of the museum there in the spring of 2014.

“Terry could not bring himself to go,” she says.

Betty said she and Terry plan to mark the 20th anniversary of Eric’s passing with a “very quiet day” which will likely include time with Kim, their son-in-law and two grandchildren who, sadly, will not get to know their uncle in the way others did.

Betty last saw her son when he returned home for a Christmas visit in 2000, but the two shared a meaningful phone conversation the day before he died.

“I am very thankful for that,” she says. “When anyone asks what we miss most about Eric, the answer is ‘everything’.”

Photos provided by the Bennett Family and Ferris State University