Karen Church, CEO of ELGA Credit Union, has been selected as Cityzen of the Year! She is the third person MCM has recognized as one who is an advocate for the community and goes above and beyond to make it a better place through volunteerism and service. And this is a very special year for Church, as she will retire in February 2022. Church sat down with MCM to talk about her love for her community, her years with the credit union, her service in the City of Flint and plans for the future. “I’m a little bit sad,” Church admits. “ELGA CU has been my life for 45 years.” 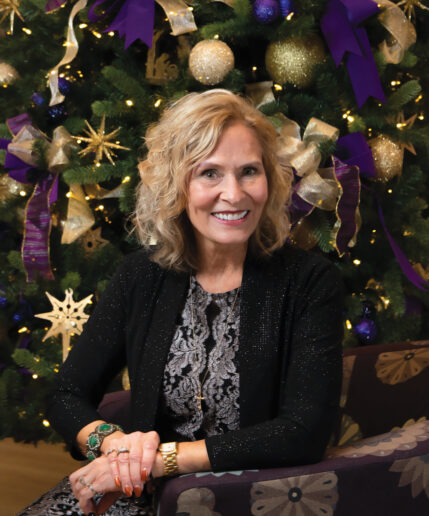 Church was born in Flint, one of seven children. Her father owned an appliance store in Flint where she started working at a very young age. Then, her parents picked up and moved the family to the country, to the small town of Otisville. Wanting to work and attend school at the same time, Church asked a teacher if she could participate in a co-op program. At the time, Lakeville MHS had no co-op program, so Church helped create one and began working at ELGA Credit Union during her senior year. After a couple years’ break, she returned to the credit union as a full-time employee. She started out stuffing envelopes, then became a teller, a lender, and held other positions until 1993, when she was selected as the CEO. “The more I learned, the more I was given to do!” she exclaims.

ELGA Credit Union grew from a single location to 14 branches – from $100 million in 2001 to $1.2 billion in assets today. “I have an amazing team of people who do a great job,” she shares. “I’m just their coach and cheerleader.” She is especially proud of one of the newest branches, located in Downtown Flint on Saginaw Street. “We had wanted a Downtown Flint branch since 2001,” she says. “I love our Downtown Branch. We are part of the Downtown atmosphere. It was a good move for us.”

What Church appreciates most is seeing those in need walk through the doors of Catholic Charities without being judged. She remembers an evening when she walked into a Catholic Charities board meeting and saw a father and his young children waiting outside. After inquiring why they were there, Church was told they were waiting for the Warming Center to open. “It was cold outside and it never occurred to me that children would be going to the Warming Center,” she remembers. So, after the meeting, she decided to go to the Warming Center and see for herself what it was like. There were three families with children there. “They were laying on the floor. There were no beds, and they were laying with their heads on the table,” she recalls. “Each one had a different story. It broke my heart and I cried on the way home. I plan to work more on improving the homeless situation after I retire.”

Church has been working on Catholic Charities’ Tiny Home Project which will hopefully kick off in the spring. “There are plans for 20 tiny homes for the homeless (on Saginaw Street),” she reports. “We hope to give people a place they can call home.” She is also involved in working on the St. Michael’s Catholic Church remodel, a project that is dear to her heart.

MCM asked Church some questions about the importance of volunteerism and community service in her life.

What motivates you to volunteer?

“I love seeing what can be accomplished when people work together, giving of their hearts and their time. It is a great way to learn about other people. I learn so much about our ELGA CU associates when we are doing a community project. The associates volunteer 16 hours a year. We hire people who want to give back, and they learn so much about their coworkers while helping the community.”

What causes do you support?

“I have hosted the 100 Women Igniting Change group for several years – it’s an exciting way for women to join together and support local charitable organizations. I also enjoyed being a part of the Greater Flint Community Foundation’s Women Girls Advisory Council for eight years. My husband and I even started an endowment fund for literacy to support the cause in our area. This past year, I was a part of the Business, Banking and Workforce Development Subcommittee of the Greater Flint Coronavirus Task Force on Racial Disparities, which addresses inequities in minorities and businesses. ELGA CU loves to work with small businesses whose owners have a vision to make their business profitable. There are banking services available for everyone.”

What has been the most rewarding work at ELGA CU?

“My work has been very rewarding. We help people establish credit, buy their first car, open their first bank account. Seeing members start out with no hope to save and borrow, ending up in a much better place, going from good to great, has been very rewarding. ELGA has been involved in many volunteer activities over the years, including the Diaper Drive, Stuff the Blue Goose Toy Drive, filling a utility truck with school supplies, making blankets for patients at Hurley, Habitat for Humanity and Relay For Life.”

Tell us about a time when you feel you changed someone’s life.

“I’m most proud of the work we did for the Neumann family in Clio whose two children had been diagnosed with cancer. Their house was in desperate need of major repair. We were able to find volunteers from every trade who worked to get the house up to code – it was truly a ‘Miracle Makeover.’ I am also proud of the annual ‘Ginormous’ Tent Sale held at ELGA CU, which benefits Catholic Charities.”

How has volunteering impacted your life?

“Volunteering and performing community service makes me really grateful for all that we are given. It is so fulfilling to bring something to fruition with the help of others, and to see how you can make an impact on someone else’s life. It makes my heart happy to see how happy it makes others.”

Church and her husband, Duane, have two adult children and six grandchildren. Their daughter and her husband have three sons and live in Grand Rapids, MI. Their son and his wife adopted a baby through Michigan’s Safe Delivery system, which allows parents to voluntarily surrender a newborn and declare their wish to put the baby up for adoption. “It is such a beautiful program,” says Church. The couple has since become the parents of twins.

What Church looks forward to most after retirement is spending more time with the grandchildren and traveling with her husband. She will also continue serving the needy in Downtown Flint.”I have had a love for the city, always!” she exclaims. “Flint has heart – even when we are down, we always come back stronger. There are many people who envision a better Flint.”

Church will continue to volunteer and help others. “Giving back has always been part of my life. It doesn’t matter what you have, you can share it with others. The more generous you are, the more you receive.”