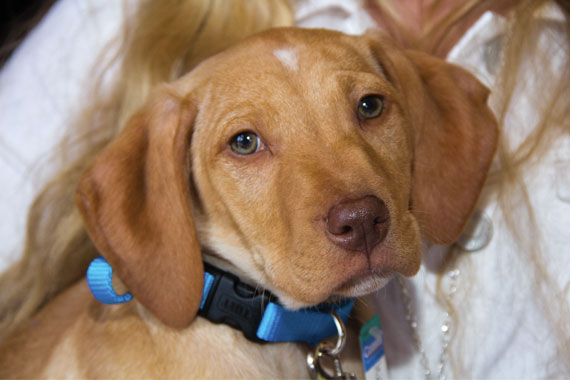 At this year’s Paws on Parade, the featured pet was a dog that had suffered unspeakable cruelty, was dramatically rescued from the streets and recovered from his serious injuries with the care of a loving foster family. He was later adopted, and his heartbreaking yet uplifting story, which was presented in a video, brought tears to the eyes of many attendees. The event also included both silent and live auctions, with items donated by many local businesses and private citizens. “Every year, this event is better than the year before,” said Dawn Johnson, director of the Humane Society.

A nonprofit organization, the Humane Society’s funding comes from events like April’s Paws on Parade, and Ties and Tails – a six-course sit-down dinner held in November at the Flint Golf Club and featuring an auction of eight big-ticket items. “Black tie is optional, and you even see dogs dressed in tuxes,” said Dawn, adding that the best part of this event is that dogs are allowed. “They get a nice meal, too!” she laughed. The HSGC’s next event is the 8th Annual Humane Society Car, Truck & Bike Show, held at the Humane Society and put on by the Team Corvette Club.

About the Humane Society
The Humane Society’s motto is: “Serving the pets and people of Genesee County since 1926.” Dawn Johnson said the operation is funded completely by the generosity of the community and is not affiliated with other humane societies. There are four cornerstones to the mission: to provide shelter/adoption of companions animals; to reduce over-population of pets; to prevent cruelty to animals; and to promote humane education. While its goal is to find a new home for pets that have been surrendered, potential adoptions can be denied. “Our duty is to make sure the next home for these animals is going to be decent,” said Dawn.

Adoption fees at the HSGC range from $25 to $400 and include spaying or neutering and micro-chipping prior to adoption. Cats are tested for feline leukemia, which is their No. 1 killer, and dogs receive all required vaccinations and a test for heartworm. If any tests are positive, the Humane Society treats the animals, at a cost of $400. Each adoptee goes home with a starter kit that includes coupons for veterinarian service and free food. Dogs get a new collar, leash and I.D. tag, and cats go home in a carrier.

There are some misconceptions about what actually occurs at the Humane Society. Dawn said they do not euthanize animals due to lack of space at the facility; however, they can only take an animal in if they have the space. If the facility is full, people are encouraged to come back another day. In fact, there are only two reasons why any animal is euthanized: if it is too sick or injured, or if it has extreme behavioral issues. “If we think we can help them, we take them,” she said. The Humane Society will euthanize animals at the owner’s request, and the procedure is done very humanely. The remains are taken to a cremation center and put in a mass grave, not a landfill. “We try to make it dignified,” Dawn said. “They were living beings. They deserve it.”

From the director to the kennel cleaner, the Humane Society staff is a compassionate group. There are 20 staff members and many, many volunteers. “We sure couldn’t do it without our volunteers,” Dawn said. This past year, volunteers logged 14,000 service hours. The facility also has a new addition – a spay/neuter clinic – thanks to a generous donation included in someone’s last will and testament.